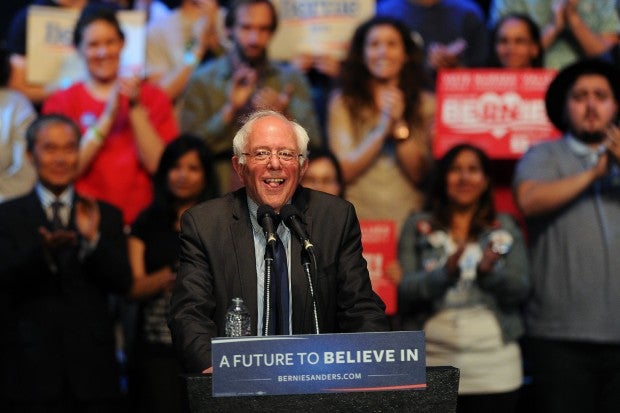 WASHINGTON — Democratic presidential candidate Bernie Sanders may be drawing thousands of people to his rallies and raising millions of dollars online, but increasingly he’s also having to make the case that his campaign isn’t a lost cause.

Sanders is favored over Democratic front-runner Hillary Clinton in this weekend’s contests in Washington state, Hawaii and Alaska. The Vermont senator also points to April contests in Wisconsin and New York, and California’s June 7 primary, as elections where he could cut into her wide lead in delegates who will decide the Democratic nomination.

That lead, however, is more than 300 pledged delegates — roughly about double the margin that then-Illinois Sen. Barack Obama held over Clinton during the 2008 primaries. It’s math that’s forced Sanders to defend his path to victory amid whispers he should drop out.

“There’s some mythology going around that we can’t win this election — that is mythology,” Sanders thundered at a Los Angeles rally on Wednesday night.

Sanders’ overwhelming victories in Tuesday’s caucuses in Idaho and Utah helped him offset a loss in Arizona, where he campaigned extensively but failed to win more than 40 percent of the vote. He netted about 20 more delegates than Clinton in the three states, but he ended the night still far behind Clinton in the overall delegate count.

Once a major longshot, Sanders has pushed Clinton on policy and across the political map, winning a dozen states and challenging Democrats to confront income inequality and big money in politics. His rallies this past week drew more than 17,000 people in Seattle, including those standing in line or in an overflow room, and 13,000 in San Diego.

His online fundraising acts like an ATM — he has collected more than $140 million from 2 million donors, raising $94 million in increments of $200 or less.

Even as Clinton focuses on Republican front-runner Donald Trump, Sanders has yet to ease up on the ex-secretary of state, regularly assailing her use of super political action committees and her vote to authorize the war in Iraq. He has demanded she release the transcripts of her private speeches before Wall Street banks, adding with sarcasm that they must have been “written in Shakespearean prose” to merit the $225,000 paydays she received to making them.

Yet the numbers remain difficult for Sanders.

Clinton enters Saturday’s contests with 1,223 pledged delegates compared to 920 for Sanders, according to an Associated Press count. Including superdelegates, the elected officials and party leaders free to support any candidate, Clinton’s lead is 1,690-946. It takes 2,383 delegates to win the Democratic nomination.

If Sanders hopes to catch up to Clinton in pledged delegates, he must win 58 percent of those remaining. So far, he’s only winning 43 percent. Overtaking her lead when superdelegates are included would require him to do even better.

“He can’t win, but he’s also the Energizer bunny. He’s not going to stop,” said Democratic strategist Craig Varoga, who is not affiliated with a presidential campaign. “He will keep on going even when it’s mathematically impossible for him to win.”

READ: Terrorism looms as US candidates compete in Western states

Clinton often reminds her audiences she has won more votes than any other presidential candidate, including Trump. “I have gotten 2.6 million more votes than Bernie Sanders,” she said Tuesday in Everett, Washington.

Sanders’ best opportunity to cut into Clinton’s lead may rest in New York, which Clinton represented in the Senate, and in California, with 475 pledged delegates, the most of any state. Clinton, it should be noted, won both states convincingly over Obama in 2008.

Sanders senior adviser Tad Devine said a loss for Clinton in New York “would be an enormous setback. Maybe they can recover from that, but maybe they can’t. That is going to be a milestone in the nominating process.”

He added, “In California, we do have the potential for a substantial victory.” Recent preference polls show Clinton with a lead in the state.

Sanders has pledged to take his campaign to the Democratic National Convention in Philadelphia to give Democratic voters a choice. His campaign has dismissed calls to drop out, a notion that gained attention this week when Markos Moulitsas, a prominent liberal and the founder and publisher of the Daily Kos, wrote that Sanders’ “race to the White House is over.”