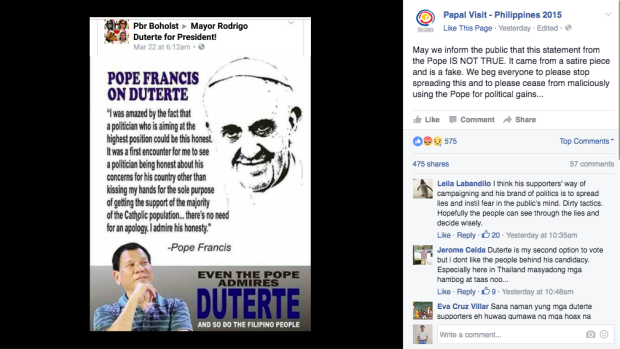 The Catholic Bishops Conference of the Philippines (CBCP) has denied that Pope Francis is endorsing Davao City Mayor Rodrigo Duterte for the presidency.

Through the Papal Visit-Philippines 2015 Facebook page, the CBCP Media Office denied on Wednesday claims that the Catholic Church is endorsing candidates for the May national and local elections.

The statement was made following a viral post which claims that Pope Francis is “admiring” Duterte for his “honesty.”

The CBCP asked the faithful to stop spreading the fake post and “cease from maliciously using the Pope for political gains.”

Aside from the fake post where the Supreme Pontiff is supposedly heaping praises for Duterte, the CBCP also belied another post which claims that the Catholic Church is calling for a “block voting” for the administration tandem of Manuel “Mar” Roxas II and Ma. Leonor “Leni” Robredo. 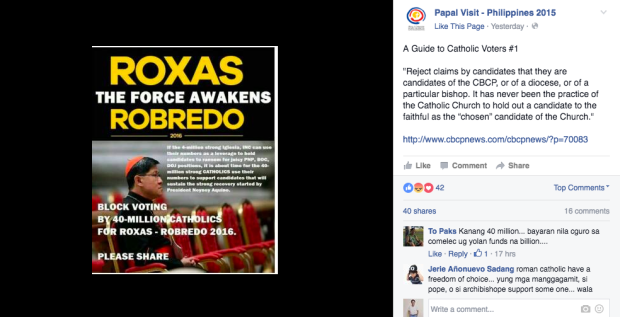 “Reject claims by candidates that they are candidates of the CBCP, or of a diocese, or of a particular bishop.  It has never been the practice of the Catholic Church to hold out a candidate to the faithful as the ‘chosen’ candidate of the Church,” Villegas said.

It can be remembered that Duterte drew flak for supposedly cursing Pope Francis for the heavy traffic which ensued during his papal visit to the Philippines last year.

Duterte has since apologized for what he said. JE