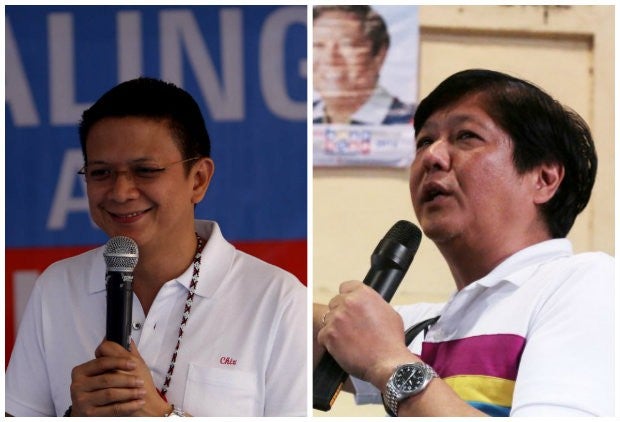 Senators Francis “Chiz” Escudero and Ferdinand “Bongbong” Marcos Jr. are sharing the top spot in the vice presidential race, according to the results of the March 22 Social Weather Stations (SWS)-Bilang Pilipino survey.

The survey results, which were first reported by Interaksyon.com on Thursday, showed Escudero and Marcos in a statistical tie, with Escudero picked by 30 percent of the respondents and Marcos getting 28 percent.

Three percent of the respondents said they were undecided.

The survey was conducted two days after the second government-sanctioned presidential debate in Cebu City. Only four of the five candidates participated in the said debate.

Drilon and Pangilinan shared the 1st-2nd spot with 61 percent. They were followed by incumbent Senator Vicente “Tito” Sotto III who is the sole third placer with 58 percent. He is followed by Senator Ralph Recto with 56 percent while former Akbayan party-list representative Risa Hontiveros and former senator Panfilo Lacson share the 5th to 6th spot with 55 percent.

READ: Sotto back on top as most preferred senatorial bet—Pulse Asia

The survey has sampling error margins of ±3 percent for national percentages, and ±7 percent in Metro Manila, Balance Luzon, Visayas and Mindanao. CDG