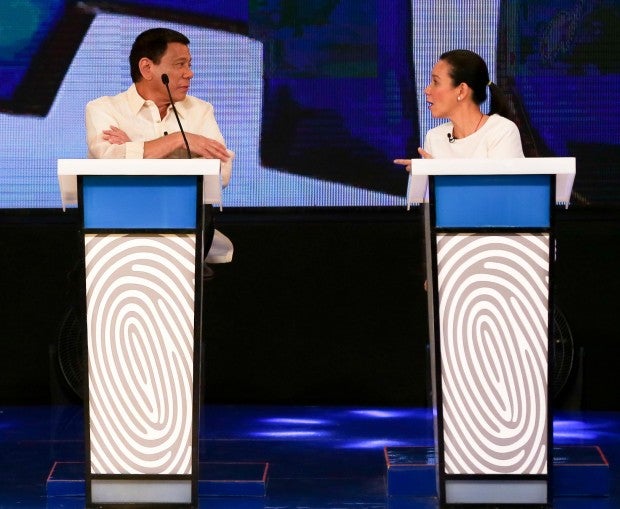 Senator Grace Poe remains to be the most preferred presidential candidate to succeed President Benigno Aquino III, the results of the mobile survey conducted by Social Weather Stations and TV5’s Bilang Pilipino showed.

The poll results, which were first reported on Interaksyon.com on Thursday, revealed that 35 percent of the respondents picked Poe as their top choice for president.

Duterte came in second with 26 percent, followed by Binay with 18 percent and Roxas with 17 percent. Senator Miriam Defensor Santiago, who was absent during the Cebu debate, placed fifth with two percent.

One percent of the respondents were undecided.

Poe emerged as the top choice of respondents from the National Capital Region (31 percent), rest of Luzon (41 percent), and the Visayas. (35 percent). She edged Duterte in Metro Manila with four points.

Meanwhile, Duterte remains as the most preferred candidate of the respondents from Mindanao (49 percent).

READ: Duterte ties Poe at No. 1 in latest Pulse survey

The neophyte senator is also the top choice among men (34 percent) and women (37 percent) respondents.

According to SWS, the post-debate poll was actually the second survey it conducted in a span of five days—from March 18 to 22—in order to examine the shift in voting preferences after the debate.

In the pre-debate poll which was conducted on March 18, Poe was the top pick of respondents with 33 percent while Duterte placed second with 24 percent. They were followed by Binay (20 percent), Roxas (18 percent) and Santiago (3 percent).

Of the 1,200 original respondents, 806 or 67 percent responded in the March 22 survey. The survey has sampling error margins of ±3 percent for national percentages, and ±7 percent in Metro Manila, Balance Luzon, Visayas and Mindanao. Meanwhile, 883 respondents answered during the March 18 pre-debate poll.

The respondents of the SWS-Bilang Pilipino survey are equipped with mobile phones where they can answer the survey questions forwarded to them. During each survey day, the respondents answer two to three questions. JE