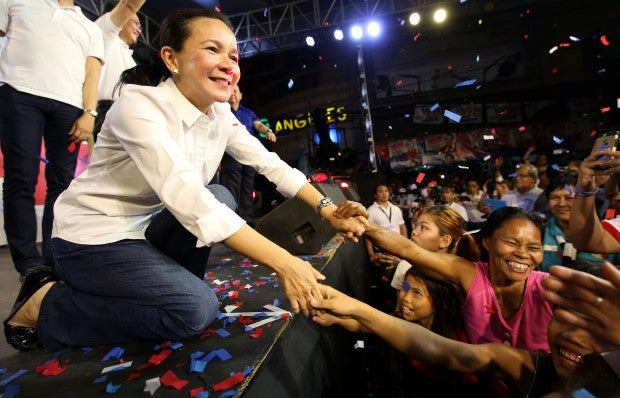 Senator Grace Poe was picked by most of the respondents of the Social Weather Stations-Bilang Pilipino mobile survey as the winner of the second presidential debate held in Cebu City last Sunday.

Senator Miriam Defensor Santiago was not able to participate because she opted to undergo a clinical trial of a new anticancer drug.

READ: Duterte ties Poe at No. 1 in latest Pulse survey

In terms of geographic area, Poe was picked as the winner of the debate among the respondents from Balance Luzon (46 percent) and Visayas (36 percent). However, she came second among respondents from Metro Manila and Mindanao.

Male respondents picked Duterte as the debate winner (36 percent), followed by Poe with 29 percent, Roxas with 23 percent and Binay with seven percent.

Meanwhile, Poe was declared the debate winner among female respondents with 51 percent. Poe is followed by Duterte with 26 percent, Roxas with 10 percent and Binay with 9 percent.

The survey had 1,200 original respondents—300 respondents each in Metro Manila, Luzon, Visayas, and Mindanao. Of the 1,200 respondents, 794 or 66 percent responded to the mobile survey.

The respondents were given smartphones where they answer survey questions sent to them.

For the March 21 survey, the respondents answered the following questions:
a. Have you watched the last Presidential Debate this March 20, 2016? (Yes, No)

b. IF WATCHED THE DEBATE: In your opinion, who came out the best during the last Presidential Debate on March 20, 2016? (Jojo Binay, Rody Duterte, Grace Poe, Mar Roxas, Don’t know)

The survey had sampling error margins of ±3 percent for national percentages, and ±7 percent in Metro Manila, Balance Luzon, Visayas and Mindanao. IDL