TWO opinion polls posted by INQUIRER.net yielded different winners of the second presidential debate which was held in Cebu City on Sunday.

In the poll posted on the INQUIRER.net’s Facebook page, Davao City Mayor Rodrigo Duterte was chosen by the 83 percent of voters as the winner of the Cebu presidential debate.

His rivals only got single-digit numbers: administration bet Manuel “Mar” Roxas got 8 percent, Senator Grace Poe got 6 percent while Binay was in last place at 4 percent.

Duterte has secured the lead since the start of the debate on Sunday night and maintained it until Monday morning.

At least 131, 647 voters participated in the INQUIRER.net’s Facebook poll.

Meanwhile, the result was different in the INQUIRER.net’s poll which was posted on its website. The results of the survey showed that more readers believed that it was Roxas who won the second presidential debate. 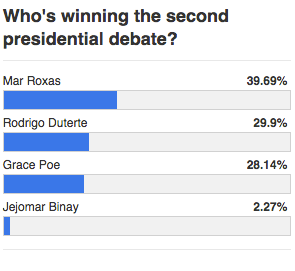 During Sunday’s debate, Duterte and Roxas exchanged tirades as the feisty mayor called the former Interior secretary as a “fraud” and a “pretentious leader.”

On his part, Roxas slammed Duterte for his brand of justice.

The debate started one-and-a-half hours behind schedule after Binay insisted bringing notes at the podium―an act barred by organizer Commission on Elections.

The three-hour debate was hosted by TV5 and Philippine Star. AJH

Disclaimer: The INQUIRER.net poll is not a scientific survey. It is an interactivity tool that can, within its limits, reflect the interests of online readers.

Read Next
Roxas to Poe: Aquino won’t pick me if he doubted me
EDITORS' PICK
Luxe property: A way to build, preserve wealth
Comelec won’t proclaim party-list groups yet
Duterte signs law giving rights, more protection to foundlings
Honolulu Café is the cure for your Egg Tarts and Roastings cravings
DOJ-led panel drops 29 cases of torture, EJKs
House energy committee chair Arroyo bats for cheap electricity
MOST READ
Heart Evangelista gets a ‘no’ from Chiz Escudero after asking, ‘Do I deserve a bag?’
Foreign investors seen bracing for worse cronyism
Man posing as Marcos spox revealed to be an inmate in Bilibid — Guevarra
BIZ BUZZ: Flip-flopping BIR
Don't miss out on the latest news and information.