34 killed in 3 terror attacks in Brussels

A SERIES of apparently coordinated explosions ripped through Brussels airport and a city metro station on Tuesday morning (3 p.m. in Manila), killing at least 34 people and injuring more than 170 in the latest attacks to target Europe.

A third hit Maalbeek metro station near the European Union’s main buildings, just as commuters were making their way to work in the rush hour.

Security was tightened across the jittery continent and transport links paralyzed after the bombings that Belgian Prime Minister Charles Michel branded “blind, violent and cowardly.”

“What we feared has happened,” Michel said at a news conference, adding that authorities were concerned that more attacks could come.

European security officials have been bracing for a major attack for weeks, and warned that the Islamic State group was actively preparing to strike. The arrest on Friday of key Paris suspect Salah Abdeslam heightened those fears, as investigators said many more people were involved than originally thought, and that some are still on the loose.

Although there was no immediate claim of responsibility for Tuesday’s attacks, supporters of the Islamic State praised the blasts on social media.

“The state will force you to reevaluate your ways a thousand times before you are emboldened to kill Muslims again, and know that Muslims now have a state to defend them,” one supporter of the group said on Twitter. 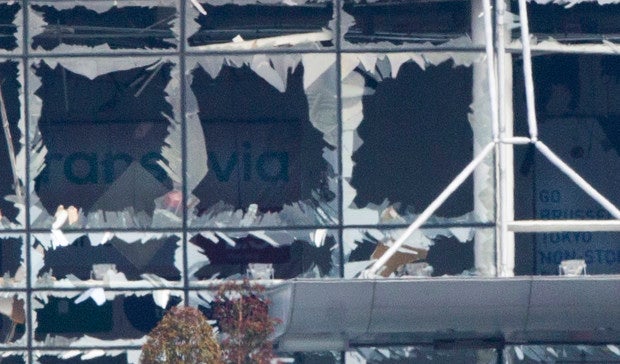 The blown out facade of the terminal is seen at Zaventem airport, one of the sites of two deadly attacks in Brussels, Belgium, Tuesday, March 22, 2016. Authorities in Europe have tightened security at airports, on subways, at the borders and on city streets after the attacks Tuesday on the Brussels airport and its subway system. (AP Photo/Peter Dejong)

Witnesses said victims lay in pools of blood at the airport, their limbs blown off. There were chaotic scenes as passengers fled in panic, with a thick plume of smoke rising from the main terminal building.

“A man shouted a few words in Arabic and then I heard a huge blast,” said airport baggage security officer Alphonse Lyoura, his hands bloodied.

“A lot of people lost limbs. One man had lost both legs and there was a policeman with a totally mangled leg,” he said.

The explosions triggered a transport shutdown in the city that is home to the headquarters of both the European Union and the North Atlantic Treaty Organization (Nato). Flights were halted with metro, tram and bus services all suspended.

European leaders reacted with shock and solidarity, urging cooperation in the fight against terrorism on a continent that has been on high alert for months.

“The whole of Europe has been hit,” said French President Francois Hollande, whose country is still reeling from jihadist attacks in Paris that killed 130 people in November.

Sweden’s Prime Minister Stefan Lofven branded the blasts an “attack against democratic Europe.” The British premier, David Cameron, tweeted that his country would do “everything we can to help,” and announced that Britain’s Cobra security committee would meet on Tuesday.

Russian President Vladimir Putin said the blasts “show once more that terrorism knows no borders and threatens people all over the world,” according to a Kremlin statement. 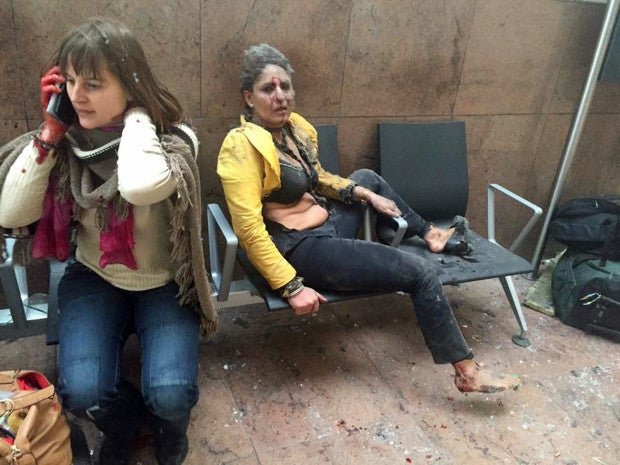 In this photo provided by Georgian Public Broadcaster and photographed by Ketevan Kardava two women wounded in Brussels Airport in Brussels, Belgium, after explosions were heard Tuesday, March 22, 2016. A developing situation left at least one person and possibly more dead in explosions that ripped through the departure hall at Brussels airport Tuesday, police said. All flights were canceled, arriving planes were being diverted and Belgium’s terror alert level was raised to maximum, officials said. (Ketevan Kardava/ Georgian Public Broadcaster via AP)

At the airport, two explosions splattered blood across the departure lounge and collapsed the ceiling. The explosions hit during the busy morning rush. Smoke was seen billowing out of the terminal.

Airport worker Anthony Deloos said the first explosion took place near the Swissport counters where customers pay for overweight baggage. He and a colleague said a second blast hit near the Starbucks café.

“We heard a big explosion. It’s like when you’re in a party and suddenly your hearing goes out, from like a big noise,” Deloos said, adding that shredded paper floated through the air as a colleague told him to run. “I jumped into a luggage chute to be safe,” he said.

Tom De Doncker, 21, a check-in agent intern, was near the site of the second explosion.

“I saw a soldier pulling away a body,” he said. “It felt like I was hit, too,” from the concussion of the blast.

Authorities told people in Brussels to stay where they were, bringing the city to a standstill. Airport security was also tightened in Paris, London and other European cities.

Zach Mouzoun, who arrived on a flight from Geneva about 10 minutes before the first blast, said the second, louder explosion brought down ceilings and ruptured pipes, mixing water with the victims’ blood.

“It was atrocious. The ceilings collapsed,” he said. “There was blood everywhere, injured people, bags everywhere… . It was a war scene.”

Near the entrance to Brussels’ Maelbeek subway station, not far from the headquarters of the European Union, rescue workers set up a makeshift medical treatment center in a pub. Dazed and shocked morning commuters streamed from the metro entrances as police tried to set up a security cordon.

Marc Noel, 63, was about to board a Delta flight to Atlanta, to return to his home in Raleigh, North Carolina. He was in an airport shop buying automobile magazines when the first explosion occurred 50 yards away.

“People were crying, shouting, children. It was a horrible experience,” he said, adding that his decision to shop might have saved his life. “I would probably have been in that place when the bomb went off.”

With three runways in the shape of a “Z,” the airport connects Europe’s capital to 226 destinations around the world and handled nearly 23.5 million passengers in 2015.

Belgium has emerged as a focus of counterterrorism investigators after the attacks in Paris in November that left 130 people dead.

On Monday, Belgian authorities asked the public’s help in finding Najim Laachraoui, 24, whom they identified as an accomplice of Abdeslam. Authorities are also searching for Mohamed Abrini, 31, who was filmed with Abdeslam at a gas station on a highway to Paris two days before the Nov. 13 attacks. Reports from AP and AFP