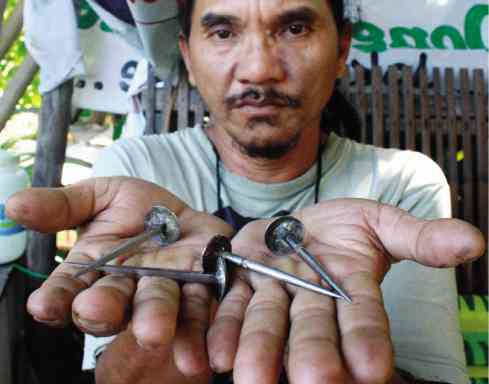 RUBEN Enaje shows off nails which are pounded into his hands and feet every Good Friday. E.I. REYMOND T. OREJAS/CONTRIBUTOR

FEWER MEN are taking to crosses in Barangay San Pedro Cutud, and it has remained an all-men affair.

Foreigners are prohibited from joining crucifixion rites in Cutud as well as in nearby Barangay Santa Lucia and San Juan, according to Ferdinand Caylao, chair of this year’s Maleldo (Holy Week) committee. Unruly behaviors by foreigners led to the ban.

Politicians and election candidates are banned from talking during the program or from displaying their campaign materials in the three villages, Caylao said.

Also banned are child flagellants who wound their backs with glass shards or blades.

For the first time, five closed-circuit television cameras will be installed in Cutud for security reasons, Caylao said.

The city government of San Fernando is starting its heritage tours before and after the crucifixion rites. Business enterprises will sell pasalubong (gift) and native food. Home stays in accredited houses are allowed in the three villages.