A journey of man on the cross 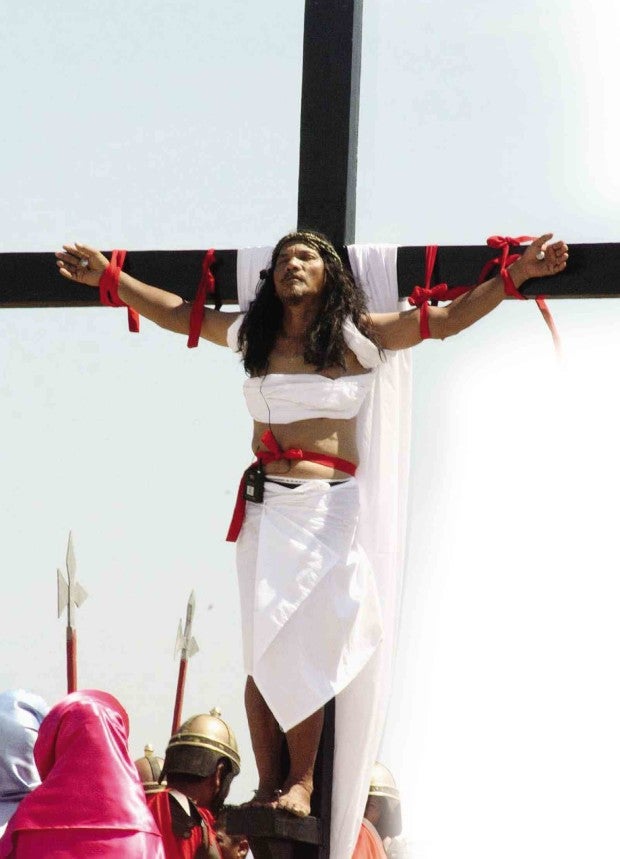 Ruben Enaje had allowed himself to be nailed to a cross every Good Friday since 1985 as an act of thanksgiving for surviving a fall. E.I. REYMOND T. OREJAS / CONTRIBUTOR

RUBEN ENAJE is having himself nailed to a cross for the 30th time on Good Friday, March 25, in Barangay San Pedro Cutud in the City of San Fernando, the Pampanga capital, as a community duty—the only Filipino doing the painful rite for the longest time.

Like in 2014 and 2015, he has extended again his crucifixion because his village won’t allow him to retire the task. The unorthodox Lenten rite was begun in Cutud by itinerant faith healer Artemio Anoza in 1962.

“[The village council] has not found a replacement for me so I still have to carry out the tradition in our village,” said the 55-year-old sign maker who paints houses on the side.

Because that’s the case, he has yet to stop though he had already completed in 2013 his 27 years of personal thanksgiving for surviving a fall from a three-story building in Tarlac City in 1985.

“I could not stop unless someone suitable takes my place,” he told the Inquirer without sounding helpless or regretful.

Barangay captain Zoilo Castro said the man leading penitents who take to crucifixion as a panata (vow) should at least be respected in the community and has no vices and criminal records.

Enaje fits the part, he said, adding that the next in line are not ideal successors.

For the 30th time also, Enaje will play the role of Jesus Christ in the street play of the Via Crusis (Way of the Cross), according to Allan Navarro, who directs the play that his grandfather Ricardo has staged every Good Friday since 1954.

Enaje’s first nine years on the cross were his way of thanking God for making him survived a fall without wound or pain. The next nine years were for seeking help for the cure of his daughter Ejay from asthma.

The third round was for the healing of his wife Juanita, who had a painful lump on her jaw.

“Each time the nails are pounded on my palms and feet, I could not take the pain. I always think I would die. Jesus Christ endured more,” Enaje said.

At noon on Good Friday, when he is hoisted high on the cross at a local Calvary made out of Mt. Pinatubo’s lahar in Cutud’s Purok Cuatro, Enaje said he would pray for the Philippines as Filipinos elect their national and local leaders.

“I will ask God to make our elections peaceful and help us choose good leaders who will really solve poverty,” he said.

The Catholic Church prohibits crucifixion and other bloody forms of penance, but Enaje said the tradition has brought him closer to God. “To me, it’s a daily miracle that we do not miss any meals,” he said.

Enaje frequently prays for a replacement as his aging body could not bear more pain. The pain on his right shoulder, which carries a big wooden cross, pesters him year round.

Like in past years, he wants the 20,000 or so spectators to stay. “I hope they don’t leave at once. I hope they reflect and feel the sufferings of Christ. I hope they join me in praying,” he said in Kapampangan.