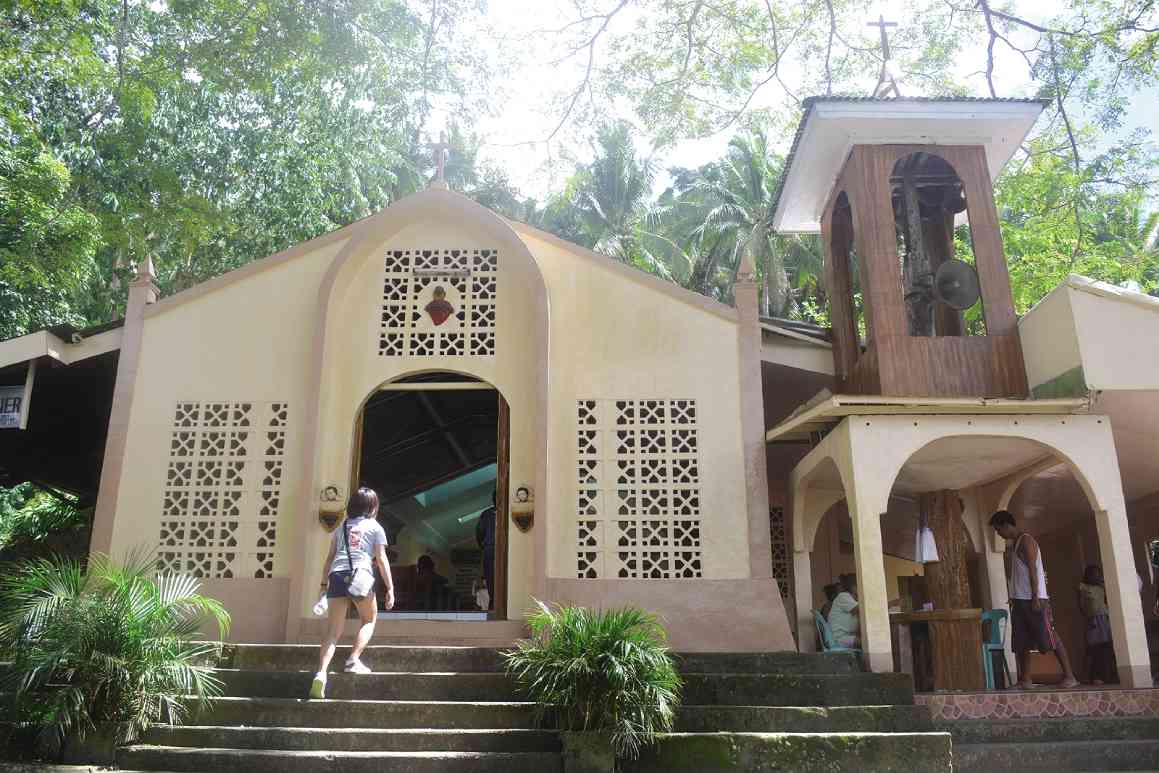 ST. FRANCIS Xavier Shrine, a hilltop spiritual destination in Maasin City, Southern Leyte province, is known as Dagkutanan, a word in the vernacular for a place where one lights a candle and says a wish. VICKY ARNAIZ/INQUIRER VISAYAS

MAASIN CITY—Army officer Edwin Malleguez Dumalagan has a “panata” (vow). Before leaving for his next assignment, he will make the 3-kilometer uphill trek to St. Francis Xavier Shrine in Maasin City, Southern Leyte province.

The soldier believes that St. Francis has kept him safe every combat operation.

Dumalagan, a resident of Barangay Basak in Maasin, has been assigned to Mindanao and the Bicol region. Whenever he completes a tour of duty and comes home, he makes sure he goes to the shrine, even during typhoons.

Dumalagan is just one of thousands who endure the two-hour trek to the shrine in Barangay Hanginan, either to pray or to thank the saint for granting a favor. The number usually doubles during Good Friday, when pilgrims start walking to one of Maasin’s highest points at 1 p.m. so they can be at the shrine at 3 p.m., the time of Christ’s crucifixion.

The city government deploys more traffic enforcers to Hanginan during Holy Week to secure the pilgrims.

Though going to Hanginan is not easy, pilgrims enjoy the long walks under the heat of the sun because they believe their petitions will be granted if they pray at the St. Francis chapel.

The shrine is known as Dagkutanan, a word in the vernacular for a place where one lights a candle and says a wish.

From Barangay Isagani, 7 kilometers from the town center, pilgrims follow a trail that is steep and rough (like what Filipinos call “biyaheng langit,” or “trip to heaven”). As they get closer, the road is no longer as rough, but is cemented.

Climbing 300 cemented steps to the shrine is the last hurdle, but the lush green surroundings and magnificent view are part of the spiritual relief.

The attraction is not only the shrine, located about 400 meters above sea level, which also offers a panoramic scan of the city and the neighboring islands of Cebu and Bohol, but its local delicacies as well.

Mikko Duero, a food blogger of “Definitely Pinoy” from Palo, Leyte province, and his wife visited the shrine twice since 2014 and plan to make a third visit soon.

He said that in mid-2014, his wife suffered staphylococcal infection on the skin caused by a bacteria. She heard about the miraculous healing of trekkers to the shrine of San Francisco Xavier in Hanginan, so the couple decided to go there.

They prayed inside the chapel. A lay minister got a small image of St. Francis, put it on their shoulders and then on their heads. “It was a ritual that makes a connection between the pilgrims and the saint, for him to hear our prayer and let God answer it,” Duero said.

Four months later, they returned to thank the saint for healing Duero’s wife.

St. Francis Xavier was one of the founding members of the Jesuit order, Society of Jesus. He was born Francisco de Jasso y Azpilicueta on April 7, 1506, in Spain. He was only 46 when he died on Dec. 3, 1552, after he got sick on an island in China.

Devotees who want to pass the professional board exams go to the St. Francis shrine to pray. Their petitions have been granted.

Soldiers also go there to seek the protection of the saint.

Even before he joined the service, Dumalagan has always been a devotee. He said he would go to the shrine every Friday when he was young.

He managed to get a degree from Saint Joseph College’s Night School even while working. After college, he worked as a driver at Pope Paul VI Seminary before he enlisted in the Army.

Dumalagan said he had become successful in life due to his devotion to God and Señor San Francisco. He keeps inside his wallet an unwashed cloth of the saint given by the chapel years ago.

“This is my prized possession,” he said.