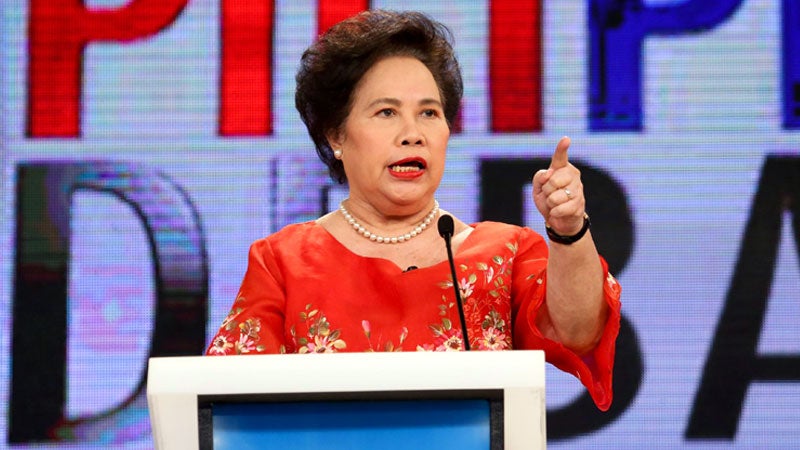 SHE MAY have been absent from the second presidential debate on Sunday, but presidential candidate Sen.  Miriam Defensor-Santiago managed to make her views heard loud and clear.

The senator, who said she was undergoing a new cancer treatment, joined the televised presidential debate on Sunday through the social networking site Twitter, where she has 2.4 million followers.

Santiago’s tweets received hundreds of likes and retweets, with her stand on divorce getting the most reaction:  3,617 likes and 3,163 retweets.

“The overwhelming social media reaction to staff tweets about the senator’s positions on key issues last night is testament to the effectivity and responsiveness of (her) program of government,” the senator’s media liaison officer, Arveen Patria, said on Monday.

“Senator Santiago was not at the debate, but she answered the questions she would have been asked,”  Patria continued, adding that the senator’s program of government was available on her website.

On Thursday, Santiago announced that she would skip the second televised debate on March 20 at the University of the Philippines Cebu, because she would undergo a clinical trial for a “new, unnamed anticancer pill.”

“I am very sorry to miss out on the debates, but it would be a disservice to the country if I forgo the opportunity to get rid of my cancer completely and strengthen myself further to serve the Filipino people,” said the senator who was diagnosed with stage 4 lung cancer in 2014.

While none of the other four candidates supported divorce, Santiago’s staff said she supported it on two grounds: “attempt on the life of a spouse by the other, and adultery or concubinage.”

When Duterte and Poe raised their hands in favor of the death penalty, Santiago’s staff tweeted that the senator was “open to the death penalty for drug traffickers. She also maintains that the justice system should be improved.”

When Duterte pressed Poe on what she would do if Philippine Coast Guard ships were attacked by China, Santiago’s staff said the senator would “assert Philippine national integrity and will join the Asean (Association of Southeast Asian Nations) in facing China.”

When the debate touched on climate change, her staff tweeted about Santiago’s plans to create “a new department to focus on disaster risk reduction, management and recovery.”

Like the other candidates who promised to support a proposed Freedom of Information (FOI) law, Santiago also vowed to certify the bill as urgent, her staff tweeted, adding that the senator had “interpellated on and introduced amendments to the FOI bill at the Senate to improve it.”

After the debate, Santiago herself posted the last tweet: “Thank you very much to my volunteers who watched the (debates) in Cebu. Hugs and kisses!”

Santiago’s final tweet showed a photograph of her group of supporters in red campaign shirts.

She will “try” to participate in the third and last debate set on April 24 in Dagupan City “if the ongoing treatments do not inhibit” her, Santiago said on Thursday.