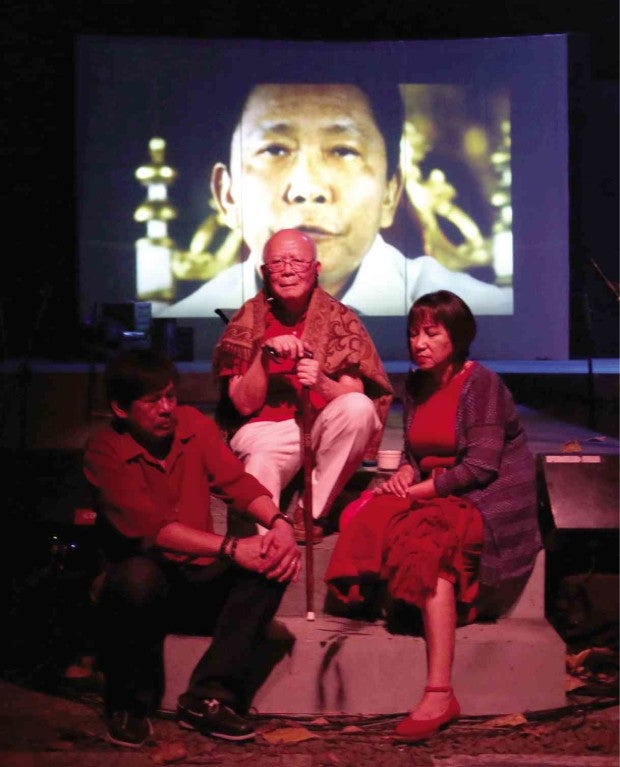 THE PAIN OF RETELLING. The cast of “Hindi na Muli (Never Again)” features National Artist for Literature Bienvenido Lumbera (center), shown here in a scene backdropped by an image of the late dictator. RAFFY LERMA

The rave reviews ranged from “very enlightening,” “daring and articulate,” to “guilt-inducing.”

“Hindi na Muli (Never Again),” a play that seeks to educate the post-Edsa generation about martial law atrocities committed during the Marcos years, capped its weeklong run on Saturday—and may be poised for a rerun outside Metro Manila to reach more young audiences before the May 9 elections.

“They appreciated that we were brave and articulate in presenting the issues. They also liked how it connected to the young generation,” said the playwright and director Bonifacio Ilagan, sharing the reaction of the viewers in an Inquirer interview.

“They even felt guilty. It’s because they know and they have read about these human rights violations but they never thought it could be this emotional,” said Ilagan, one of the activists jailed and tortured during the Marcos regime.

By word of mouth, Tudla Productions, a video recording company, heard of the production and offered its services for free to record the play so that more people can see it, Ilagan said. Plans are now being finalized for a rerun of the play, again at Bantayog and also at UP Los Baños.

Produced by Tag-ani Performing Arts Society, “Hindi na Muli” depicts the human rights violations committed during the dictatorship, using a storyline that can connect to Filipinos who were not yet born in that period and who now find scant details about this dark episode in school textbooks.

Enraged by the lies

Ilagan is one of the convenors of Carmma (Campaign Against the Return of the Marcoses to Malacañang), a group recently formed with a vow to hound the vice presidential campaign of Sen. Ferdinand “Bongbong” Marcos Jr., the late dictator’s only son and namesake.

“As soon as I learned that Bongbong Marcos was running for Vice President, I immediately thought I should do a play about martial law and connect it to his candidacy,” Ilagan said. “When Marcos started his campaign, he has been spreading lies and that really enraged me.”

To make the retelling more interesting to the target audience, Ilagan crafted a “hip and light” script about the life—and love life—of a group of teenagers in the 1970s and how their world changed when Bongbong’s father issued Proclamation No. 1081.

The cast is led by no less than National Artist for Literature Bienvenido Lumbera, who plays a family patriarch who experienced the brutality of martial law. Lumbera might as well be telling his own true story, since he and Ilagan were once both detained in a “safehouse” in Marikina City.

In an interview, Lumbera said the play should serve as a good supplement to the textbooks since it presents “a very graphic series of images” which is necessary to better understand the “atrocities, deception and theft” committed against the people.