Pilgrimage to Jubilee of Mercy churches 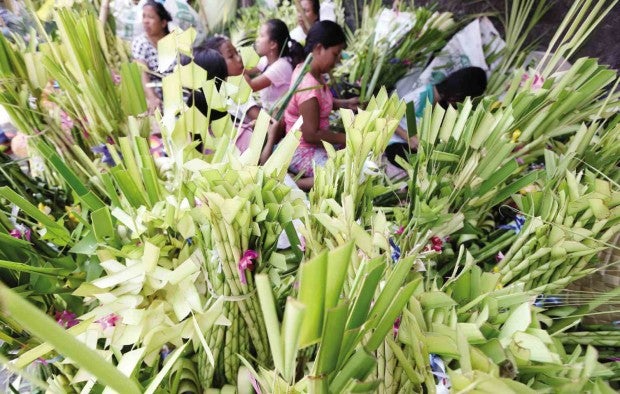 HOLY WEEK STARTS Bundles of palm fronds are displayed outside Our Lady of Peace and Good Voyage Parish Church in Antipolo City, ready for Palm Sunday rites. Palm Sunday marks the beginning of Holy Week and recalls the triumphant entry of Christ into Jerusalem, days before his crucifixion. NIÑO JESUS ORBETA

It’s a rare chance that Pope Francis doesn’t want the Catholic faithful to pass up: A pilgrimage to Jubilee of Mercy-designated churches to receive a blessing and pardon from God.

To accomplish this, Catholics need to pass through the church’s Holy Door of Mercy, go to confession, hear Mass, profess the faith by reciting the Creed and pray for the intentions of the Holy Father.

In the Jubilee Year of Mercy, from Dec. 8, 2015, to Nov. 20, 2016, some selected churches in the Archdiocese of Manila are opening more doors to make the pilgrimage an enriching experience.

At Manila Cathedral, for instance, pilgrims can venerate a wooden cross embedded with a relic from Jesus’ own cross; visit a crypt where the late Jaime Cardinal Sin’s tomb is and explore its chapels.

It’s no surprise then that busloads of pilgrims have been arriving in Manila on weekends for that rare peek into the church’s treasures in between hushed prayers.

“Everything felt so solemn,” Isabelita Malicay, 66, said after emerging from the cathedral at noon on Thursday with over a dozen fellow members of Legion of Mary from a parish in Parañaque City, south of Manila.

They left in high spirits, capping their visit with a “groufie” on the steps of the cathedral, the eighth church they visited in their daylong pilgrimage.

The Jubilee of Mercy is a special season when Catholics can gain plenary indulgence by doing a pilgrimage to a Jubilee church, shrine or basilica designated by their local bishop in their own country, without needing to fly to Rome.

Why the need for plenary indulgence?

The Catholic doctrine teaches that when a faithful goes to confession, his sin is forgiven but the consequence remains, entailing temporal punishment. An indulgence offered by the Church removes the temporal punishment due to sin, explained Fr. Kali Llamado, vice rector of the cathedral.

In a sense, this is a special season to gain a blessing from God, and remission of sins by going on a pilgrimage to a Jubilee church nearest you.

Interestingly, during this Holy Year, the Pope has authorized all priests around the world to absolve the sin of abortion, an authority usually reserved for a bishop.

“Even at the start of his pontificate, the mercy of the Father has been a central theme in his ministry,” Llamado, 29, said in an interview. “Pope Francis would like to show that the face of the Church is a merciful church, not a condemning church.”

Jubilee churches designated by bishops are scattered across the country, where more than 80 percent of the population are Catholics.

In the Archdiocese of Manila, the Jubilee churches are: Manila Cathedral inside Intramuros, Manila; Santuario de Santo Cristo Parish in San Juan; Archdiocesan Shrine of the Divine Mercy in Mandaluyong City; Our Lady of Sorrows Parish in Pasay City; and the National Shrine of the Sacred Heart in Makati City.

Since this is a pilgrimage—although a local one—the five churches in Manila are making sure participants have a “passport” to guide them in their journey.

Given at the start of every pilgrimage, the document contains Manila Archbishop Luis Antonio Cardinal Tagle’s message and excerpts from Pope’s “Misericordiae vultus” (Bull of Indiction of the Extraordinary Jubilee of Mercy) as well as the specific steps the participants need to fulfill as pilgrims in each of all the five churches, if they opt to visit all.

Upon exit, the passport will be stamped. If a pilgrim goes to all five churches, he will be issued a special certificate. But a pilgrimage to one church will suffice, Llamado said.

A pilgrimage to Manila Cathedral—one of the country’s oldest churches and a popular stop for tourists exploring the Spanish-era homes, churches and plazas in the old, walled city of Intramuros—offers a rare peek into its less explored chapels and crypt.

After passing through its Holy Door—the right door—one makes the first stop before the Jubilee Cross, which carries a relic from Christ’s True Cross and recites the Year of Mercy prayer. Looking closely at it, one can see carved images depicting the mysteries of the rosary.

The pilgrim then moves on to a grand bronze image of St. Peter on a chair, a replica of the original in St. Peter’s Basilica, and prays the intentions of the Pope (which the Vatican issues every month). One may kiss the foot of the image, as practiced in Rome.

Prayers for the dead

The next step leads to the Blessed Souls Chapel, where one offers prayers for departed loved ones before a bas-relief of Mary the Refuge of Sinners. After all, a prayer for the dead is a spiritual act of mercy, Llamado said.

Farther along this side is the St. Peter Adoration Chapel, where the pilgrim can spend a few moments of “silent reflection” on the mercy of God, he said.

The pilgrim then goes down the crypt right under the main altar. Down there is a chapel complete with an altar and pews. Lining the walls are the tombs of four departed cardinals—Sin, Michael O’Doherty (the last American archbishop of Manila), Gabriel Reyes (the first Filipino archbishop of Manila) and Rufino Santos, under whose watch the present cathedral was built from 1953 to 1958—as well as empty ones. Here, one can pray for the repose of the souls of the cardinals.

Here’s an interesting piece of trivia: Sin’s protégé, Archbishop Socrates Villages of Lingayen-Dagupan, celebrates Mass here for the late cardinal during All Saints’ Day or All Souls’ Day, according to Llamado.

The crypt is now open to all during the Jubilee of Mercy, unlike in the past when public access was limited.

Then one proceeds to the baptistry, where baptismal promises are renewed by reciting the Creed, and then on to the St. Joseph Chapel, where a corporal act of mercy can be performed by leaving a donation for the homeless in a box.

The pilgrim is then asked to pray before the image of Mary the Immaculate on the main altar as a final step before getting his passport stamped at the parish office.

The rest of the Jubilee churches in the archdiocese essentially offer a similar set of activities for the pilgrims.

The nice thing about this is that each of the five churches has designated itself as the venue for the performance of a specific corporal act of mercy by the pilgrim through donation, including sheltering the homeless, burying the dead, visiting the sick, visiting the prisoners and feeding the hungry, Llamado said.

The donations will fund the archdiocese’s programs for the needy, he said.

Like visitors from organized tours, pilgrims have been arriving at the cathedral in buses and vans especially on weekends. No wonder, out of the 10,000 passports printed, only less than 1,500 remained, hence, the need to print more, according to Llamado.

“The people were inspired to do the pilgrimage because of the passport. Besides, the steps are very concrete,” he said, chuckling. “You know how it is with Filipinos. When they practice their faith, they want something concrete.”

The crowd is expected to surge even during Holy Week, especially on Maundy Thursday’s Visita Iglesia, a practice by Catholics to make a pilgrimage to at least seven churches.

One can offer the pilgrimage to obtain a plenary indulgence for a departed loved one. The sick and elderly can still gain such indulgence by attending Mass and receiving communion in any church, and so can prisoners inside the prison’s chapels, he said.

Those who perform spiritual and corporal acts of mercy are sure to gain plenary indulgence, he added.

Tagle, in his message in the pilgrim’s passport, however, reminds all: The pilgrimage is not an end but a “pause” and a “spiritual oasis” in one’s journey to the Kingdom of God.

“After visiting each Jubilee church you must be propelled to embark on a journey of mercy—doing the works of mercy, imbuing your actions, attitude, lifestyle and life with the purest quality of mercy that God, through His Son Jesus Christ, has so generously shown us and gifted us,” he said.

After all, the Pope said that mercy and forgiveness “must be realized in daily life.”