Poe waiting for other pols to support her presidential bid 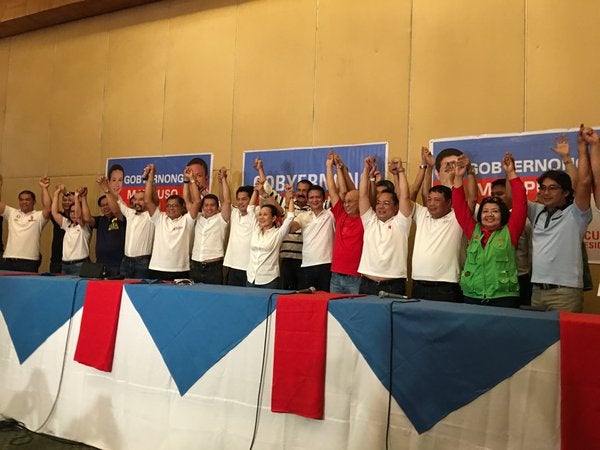 BACOLOD CITY—After getting the endorsement from a partylist coalition, Senator Grace Poe on Friday said she is now waiting for the others, who have earlier expressed their intention to support her presidential bid in the upcoming May elections.

“Ako’y nagpapasalamat sa kanila. Nakakataba ng puso,” Poe told reporters after she and other candidates of Partido Galing at Puso (PGP) were formally endorsed at a press conference held at L’Fisher Hotel here.

(I thank them. It is very heartwarming.)

(Of course, I have been with most of them before so it’s not really new and we share the same advocacy especially in the districts we have talked to. And as for the party-list groups, of course, I support their specific advocacies.)

(You know, politics is unpredictable. That’s why whatever help they are extending is very heartwarming.)

She reiterated that most of the partylist groups had been with her when she first ran and topped the senatorial elections in 2013.

(That’s why I am thankful because they are supporting my candidacy now.)

Asked if there are other groups who would come out and endorse her presidential bid, she said she was already happy with the support that she got from the partylist groups, however, she said she was still waiting for the others to follow suit.

(We are happy. I think this is a formidable foce but I am still waiting for others to follow suit. I respect whatever reason they may have. They have expressed their intention but unless they make their support official, it is hard to preempt them.)

(I am certain of the people I have talked to and I don’t know if he [Drilon] knows them. That’s why it would be better to wait for them at the right time.)

Drilon is vice chair of LP, which is rooting for its standard-bearer, former Interior Secretary Manuel “Mar” Roxas II. RAM