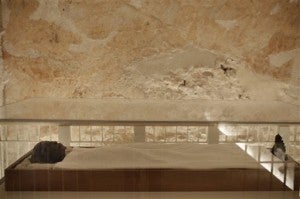 After months of thorough investigation, archaeologists have unearthed clues on the possible whereabouts of the remains of Queen Nefertiti, the iconic wife of King Akhenaten of Egypt.

A series of radar scans of King Tutankhamen’s tomb in the Valley of the Kings, the ancient necropolis of the southern city of Luxor, exposed the presence of two hidden chambers.

A report by Daily Mail said a team from Cairo University’s Faculty of Engineering and a Paris-based organization called the Heritage, Innovation and Preservation Institute used a technology called infrared thermography to scan the burial chamber.

The technology revealed that there were organic and metal matter, such as human remains, present beneath the walls. There were also interesting scratches and markings found on the western wall of King Tut’s tomb, such as perfect straight lines 90 degrees to the ground that correspond to the tomb’s other features. 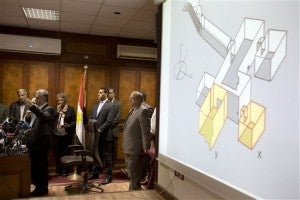 Egypt’s Antiquities Minister Mamdouh el-Damaty, left, speaks during a press conference Thursday as he displays images of radar scans to King Tut’s burial chamber on a projector, at the antiquities ministry in Cairo. AP Photo

El-Damaty believed one of the antechambers presumably keeps the remains of Kia, who was believed to be Tutankhamun’s biological mother.

Nicholas Reeves, a British Egyptologist from the University of Arizona, declared that the plastered walls could lead to two unexplored pathways, one believed to be the resting place of the legendary Egyptian Queen. It is also believed that the design of the tomb was designed for a queen and not a king.

Read Next
Poe waiting for other pols to support her presidential bid
EDITORS' PICK
What to watch out for when selecting a video surveillance solution
House energy committee chair Arroyo bats for cheap electricity
Look Through: The fate of impounded stray dogs
Metro Manila’s COVID-19 cases on downward trend, but surge not over — OCTA
Unleash the photographer in you this World Photography Day with vivo smartphones
Palace warns sugar hoarders after raid on Pampanga warehouse
MOST READ
Man abducted in Batangas gasoline station, found dead in Quezon
LOOK: Miel Pangilinan dazzles in glittery pre-debut shoot
August 19 a special non-working holiday in Quezon City
DOJ indicts bank officer in $2.1 billion Wirecard fiasco
Don't miss out on the latest news and information.