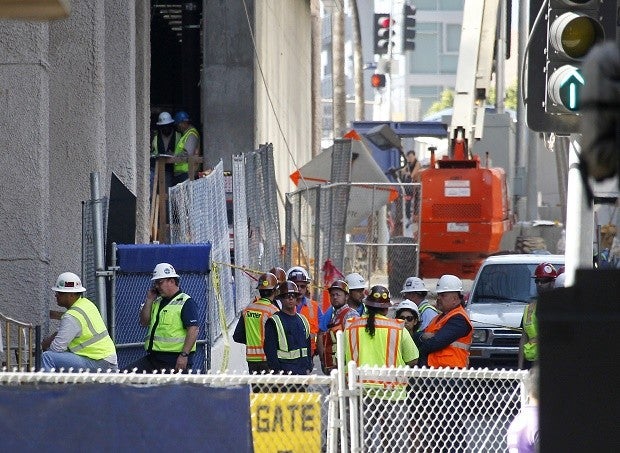 LOS ANGELES — An electrician in his second day on the project plunged some 800 feet (245 meters) to his death Thursday from a Los Angeles skyscraper that will be the tallest on the West Coast once it’s completed, officials said.

The electrician hit the trunk of the car parked below.

The woman who was driving did not appear to be seriously hurt but was taken to a hospital, city fire officials said.

The 73-story skyscraper will be about 1,100 feet tall (335 meters) when it’s completed. A ceremony was held earlier this month when the top beam was hoisted into place on the 73rd floor. The $1 billion office and hotel tower being developed by Korean Airlines Co. Ltd. is expected to open in early 2017.

The building is near the Staples Center arena where the NBA’s Los Angeles Lakers and Clippers play and is at the center of the bustling and fast-growing financial district of downtown.

Chris Martin, CEO of Martin Project Management which is supervising the construction, did not immediately say whether the man had a safety harness on as is required on the project. The floor from which he fell, the 53rd, has no windows.