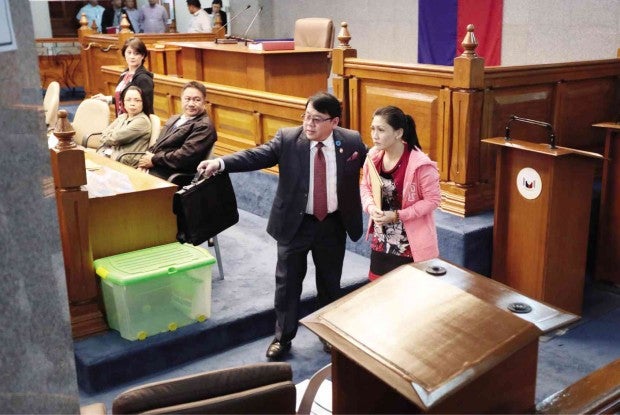 AFTER CLOSED-DOOR SESSION Maia Santos-Deguito, RCBC Jupiter branch manager, and her lawyer emerge from the executive session of the Senate blue ribbon committee, which is looking into the laundering of $81 million from the Bangladesh central bank. GRIG C. MONTEGRANDE

A former officer of the Rizal Commercial Banking Corp. (RCBC) branch on Jupiter Street in Makati City Thursday said he was offered by the branch manager, Maia Deguito, P5 million apparently in exchange for his silence on the withdrawal from the branch of the $81 million stolen from Bangladesh’s central bank.

Romualdo Agarrado, formerly a customer service head of RCBC’s Jupiter business center and now a reserve officer at the Manila office, testified at the Senate blue ribbon committee that Deguito made the “offer” at the Forbes Park home of another bank officer on Feb. 12.

The offer was made apparently after Agarrado witnessed P20 million in cash withdrawn from the supposed bank account of William Go—one of five bank accounts where the stolen $81 million was  deposited—being loaded into the car of Deguito and her leaving the bank with the money.

Agarrado’s testimony further pinned down Deguito for her involvement in the money-laundering scam. RCBC officials are accusing the branch manager of being behind the facilitation of the withdrawals of the stolen money.

Deguito declined to answer queries of senators on Agarrado’s testimony but repeatedly said she would talk freely in a closed-door session.

But the branch manager denied her life was threatened as Agarrado had testified.

Deguito’s insistence on an executive session prompted Senate Minority Leader Juan Ponce Enrile to threaten her to be cited for contempt.

In the end though, senators agreed to go on executive session and at press time were talking with Deguito and allowed the Bangladesh ambassador, Maj. Gen. John Gomes, to be present as an observer.

Agarrado, in his Senate testimony, recounted how the P5-million offer was made to him by Deguito.

He said he helped count the P20 million cash order made by Angela Torres, Deguito’s aide, on Feb. 5. The money was withdrawn from the account of William Go, who later accused Deguito of opening the account without his knowledge and consent.

The money was placed in a box and brought to the room of Deguito, who at the time was talking to someone on the phone, Agarrado  said.

He said he saw the P20 million being loaded by a bank messenger, Jovie Morales, into the car of Deguito.

“I clearly saw it because I was sitting in front of the glass main door,” Agarrado said, of the money being loaded into the branch manager’s car.

On Feb. 11, he said there were recall orders for funds sent to the branch by the head office and he informed Deguito about this. But the branch manager just “stared blankly” at him,  Agarrado said.

Later on, Agarrado said Deguito called him and Torres, and told them she had to process the transaction.

“I would rather do this than me being killed and my family,” he quoted Deguito as telling them.

At the time, Agarrado said he became scared.

On Feb. 11, internal auditors of the bank went to the branch to question its personnel and before he was interviewed, Agarrado said he had the chance to talk to Torres.

He told Torres he saw the P20 million loaded into Deguito’s car but the latter told him not to tell the auditors or Deguito would be in trouble.

“Thus, I no longer brought this matter up when I was being interviewed by the internal auditors,” Agarrado said in his affidavit which the RCBC submitted to the Senate blue ribbon committee.

Later that night, he said he was invited by a reserve officer, Adrian Yujuico, and other colleagues to the latter’s home at Forbes Park in Makati for dinner and was surprised to find out that Deguito was also there.

Agarrado recalled that Deguito told the group that she had four lawyers, one of them an “expert” on the Anti-Money Laundering Act.

“Branch manager Maia told me that her lawyer was asking how much my retirement benefits would be, and she said that I should compute the same. She then asked me, ‘Kasya na ba sa yo ang five million pesos?’ [Is P5 million enough for you?] Agarrado said in his affidavit and which he repeated in his Senate testimony.

He said Morales, the bank messenger who was with them at the dinner, tapped his shoulder and say the P5 million was “OK.”

In his testimony, Agarrado said he was surprised by the offer and was confused about it. He said he later realized the big picture.

The last time he communicated with Deguito was on March 5 when he texted her to tell the truth. She replied by saying she was not hiding and she was telling the truth.

On questioning, Agarrado said Torres, Deguito and Yujuico were friends and were coemployees at East West Bank.

Senators asked for the submission of the other affidavits of other RCBC employees but Macel Fernandez-Estavillo, the lawyer for RCBC, said the bank considered the affidavit of Torres “perjured.”

Estavillo said Torres had claimed that she loaded the money into Go’s car and she made him sign a withdrawal slip.

She said the bank would file a perjury case against Torres.

For her part, Deguito dodged the questions of senators as she said wished to talk to them privately.