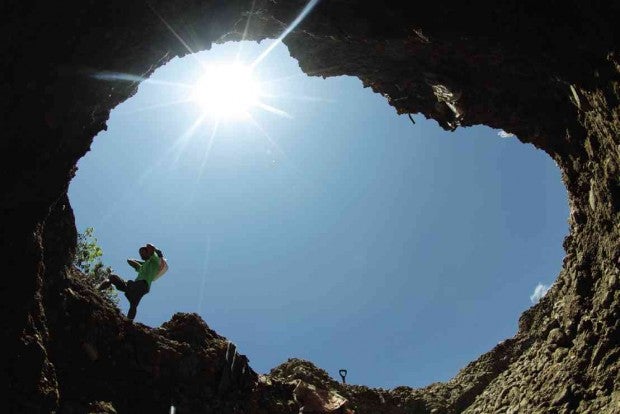 A WORKER carries a sack of sand from the site of a well being dug in search for water as the Mananga River in Talisay City, Cebu province, dries up. Sources of water in Cebu and many Mindanao provinces are drying up, bringing losses to farmers and communities dependent on agriculture. FERDINAND EDRALIN/CEBU DAILY NEWS

KIDAPAWAN CITY—The province of North Cotabato has now suffered losses of over P1 billion from the El Niño phenomenon and the rat infestation that the dry spell has triggered.

Gov. Emmylou Taliño-Mendoza said the provincial government is distributing more animals to provide communities with alternative sources of income as farming has become impossible without rains and rivers drying up.

Mangliwan said at least 50,000 hectares of rice and corn farms had been wasted by rising temperatures with more than 25,000 farmers losing their only source of income.

He said even banana plantations, which draw water from the ground, and cacao and vegetable gardens have not been spared by the dry spell.

Mangliwan said the documentation of losses continues as the extent of the damage has not fully unraveled itself.

He said unless rains come, the devastation would continue.

The cloud seeding operation has not been successful so far, Mangliwan admitted.

Mendoza said goats, swine and ducks are being distributed province-wide.

She said the provincial government has also bought rice and corn seeds for distribution after the dry spell.

In South Cotabato, local government units have also been declaring states of calamity as the dry spell also ravaged rice and corn farms in the region.

The latest areas, where states of calamities were declared, are Surallah town and General Santos City.

Surallah Mayor Antonio Bendeta said more than 2,000 ha of corn farms in the town, known as the province’s corn capital, had been laid to waste by the drought.

Even if it is categorized as a highly-urbanized city, many villages of General Santos City are still agricultural areas.

General Santos Mayor Ronnel Rivera said the city government will use the 30 percent calamity fund of the city to help farmers who suffered income loss.

In Davao del Sur, a state of calamity has also been declared in at least four major rice and corn-producing towns.

Joseph Penonia, acting municipal disaster and risk reduction officer of Magsaysay town, said at least 8,768 ha of rice and corn farms had wilted and that 6,588 families are losing income.

The other Davao del Sur towns, where states of calamities have been declared, are Hagonoy, Matanao and Bansalan.

Davao del Sur Gov. Claude Bautista said the provincial government has prepared P10,000 for each farmer hurt by the dry spell. The assistance, he said, would be released in time for the next cropping season.  Williamor Magbanua, Edwin Fernandez and Orlando Dinoy, Inquirer Mindanao