Poe on being labeled 'inexperienced': In some ways, I am proud of it | Inquirer News
Close
menu
search

Poe on being labeled ‘inexperienced’: In some ways, I am proud of it 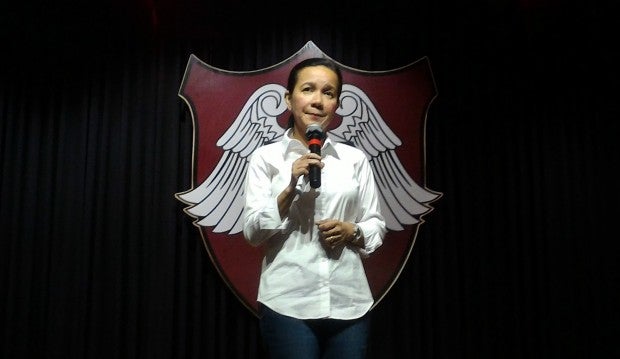 “Critics have said that I lack the experience of my opponents. I do not deny this, and in some ways, I am even proud of it,”  Poe said  at the 2016  Presidential  Dialogues  held at Dusit Hotel in Makati City. The  forum was hosted by the Makati  Business Club and  Management Association of the Philippines.

READ: Poe: I may lack experience but I’m faithful to the people

“True, I have not had the chance to serve in the Cabinet under three presidents, nor have I nor my immediate family members to run a mayor’s office for several decades, but perhaps that is why people still continue to trust me even with all the cases that have been filed against me, which is now finally resolved,”  she said.

The senator was referring to the disqualifications cases  filed  against her over her citizenship and  residency.  But the Supreme  Court   ruled that she is qualified to run for President.

Poe said being an outsider in government and politics also  has “considerable advantages.”

“For starters, one does not carry much baggage; no preconceptions, no assumptions that one has to work within the system however broken; no party mates to reward, subordinates to protect, or pet projects to tiptoe around,” she said.

As a virtual outsider, Poe said, she could  “feign ignorance and bypass the traditional rituals and practices that bind the old-timers.”

She said she could  appoint the best people from outside the usual circles, consult the best minds from here and abroad, and propose fresh solutions to old problems “without worrying whose toes will be stepped on.”

“I believe that what I do lack in experience I can more than make up for by way of genuine desire to serve the country, an openness to non-traditional points of view, and the passion of a person who has consistently believed in doing what is right,” Poe said.

“So, there you have it. This is who I am, Grace Poe, a candidate; a first-term senator, an earnest student in economics, a former school teacher, a parent, a natural-born Filipino,” she added.

Before this,  Poe  enumerated her platforms of government, including winning the war against poverty, attracting  more  investments in the country to create more jobs, among others.

“In my administration, it will be very straightforward. Those who do not meet their targets will be asked to stand down, whether they be friends, classmates, political allies or even running mates,” she said.

“ So, in sum, while I may not be an economist—far from that—or a business person by training, as a former teacher, I do know how to grade performance and to use the right carrots and sticks to elicit good behavior. Accountability will be a cornerstone of my administration,”  Poe added.

‘Inexperienced’ Grace may be another Cory

Read Next
Divers discover caged sea cows in Indonesia
EDITORS' PICK
Heads may roll at BOC, says Palace if sugar smugglers are allowed to use recycled import permits
What to watch out for when selecting a video surveillance solution
Palace: Biggest supermarkets in PH commit to sell sugar at P70 per kilo
House energy committee chair Arroyo bats for cheap electricity
vivo brings to the Philippines a powerful smartphone with a slimmer body, the vivo Y02s for only PHP 6,499
Climate change impact: Deadlier diseases
MOST READ
DepEd to give teachers P5K cash allowance within first week of classes
Alyssa Valdez to miss Creamline’s AVC Cup campaign
DOJ indicts bank officer in $2.1 billion Wirecard fiasco
Peso loses ground vs US dollar
Don't miss out on the latest news and information.