Two concerned divers have alerted authorities after finding a pair of sea cows tied and concealed inside a steel cage near the remote island of Kokoya in Indonesia.

Sea cows, also known as dugong, are rare marine animals being closely monitored by marine wildlife authorities due to their vulnerability to extinction. They are closely related to manatees.

Citing a report from animal welfare website dodo.com, a diver named Delon Lim discovered what appeared to be a mother and her calf held in separate cages.

The younger dugong was kept without restraint, while the adult was bounded by a rope wrapped around her tail. 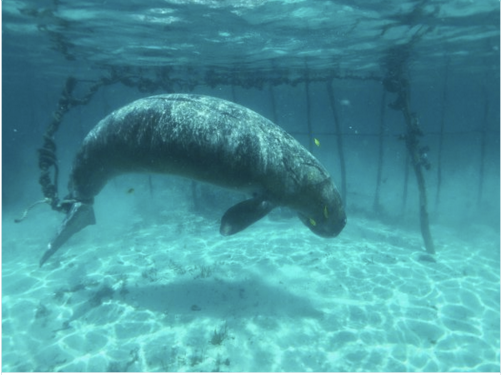 The rare animals were allegedly captured by a local fisherman who apparently wanted to profit from tourists at the animal’s expense.

“He asked for some money if we want to see the dugong or take a picture,” Lim said.

The Indonesian diver also pointed out the poor condition of the animals, which indicates that they may have been trapped for more than several weeks.

“The ropes were worn and torn and the scars and the wound on her tail are so deep,” said Lim.

“It was very heartbreaking,” he added.

The divers reluctantly agreed to pay the fisherman, who allowed them to enter the cages and take photos and videos of the creature’s ordeal.

Instagram user @rmahendradani shared the video on his page.

Within hours of posting the pictures on social media, Lim was contacted by wildlife authorities requesting the location of the cages. The mother and child dugongs were finally freed after officials found them on the spot the following day.

Charges are now being filed against the animals’ unnamed captor.

Read Next
Binay to postpone village polls if he wins as president
EDITORS' PICK
Geek out at TOYCON 2022 powered by Smart Signature
Unemployment rate up to 6% in May
Bye bye Boris: UK PM Johnson bows out with regrets but no apologies
House energy committee chair Arroyo bats for cheap electricity
High inflation: Your P1 is now worth only 87 centavos
High-risk pregnancy: Reducing your risk is in your hands
MOST READ
Suspect in grisly killing of missing woman in Bulacan arrested
Hong Kong suspends flight bans as it eases COVID-19 rules
Kim Atienza’s daughter flaunts bikini body in response to critics of her ‘revealing photos’
Cop slain in Isabela ambush
Don't miss out on the latest news and information.