UP student: I meant no disrespect for Duterte | Inquirer News

UP student: I meant no disrespect for Duterte 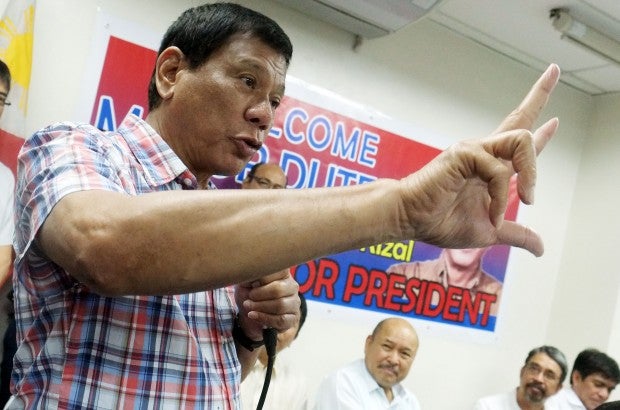 The freshman from University of the Philippines Los Baños (UPLB) who was bashed on social media for supposedly disrespecting presidential candidate Davao City Mayor Rodrigo Duterte in a forum last week broke his silence on Monday to air his side on the issue.

Stephen Villena issued an open letter where he said that he did not intend to disrespect Duterte by asking him a question in an academic forum.

“It is my hope that by doing so people will realize that I was simply posing an academic question which required an academic answer and I in no way intended to disrespect the good mayor,” Villena said.

He then explained that due to the limited time given for students for the question and answer portion, he rushed his question to get a direct answer from the mayor.

However, Villena said the spliced video made it appear that he was rushing Duterte to answer his question when in fact, it was Duterte’s camp who asked to leave the forum early.

“Before I took the floor to ask my question it was made clear to us that Mayor Duterte was in a hurry to leave the forum as it was getting late. I therefore rushed my question hoping for an immediate answer. And since I did not get a direct answer to my question I requested him to please answer my question directly ‘para maka-uwi na sya.'”

“To be clear, it was Mayor Duterte who was in a hurry to leave. The spliced video that was uploaded to the internet did not show the full exchange between me and Mayor Duterte. The cut video somehow made it appear na pinapauwi ko na si Mayor. Hindi po, sya po ang nagmadali na umuwi….The end result was that the people who only saw the shortened video but did not participate in the forum somehow got the impression that I was bastos, arrogante, walang modo,” he said.

The student also admitted that while he is not charming and suave when speaking, he did not mean to appear arrogant.

“I am not exactly suave and charming when I speak. This is probably why I was seen as insensitive. But let me just say this: MY PERCEIVED LINGUISTIC IMPERFECTION IN NO WAY IMPLIES AN ARROGANT DISPOSITION,” he said.

Villena then said that he respected those who were offended by his statements. He thanked those who defended him on social media.

He also has a message to the mayor:

He ended his letter by urging the electorate to focus on analyzing the country’s issues to help them in voting for the right candidates come election time.

“It takes maturity to make democracy work. And it takes acceptance of our diversity to make it flourish,” Villena said.

His letter has been shared more than 6,000 times as of this writing.

Villena has received threats on social media since a video of the forum was posted online. Since then, some hateful Facebook pages like “RIP Stephen Villena” sprouted.

On Sunday night, Duterte’s camp ask for their supporters to exercise “civility, intelligence, decency and compassion” in engaging other people in any discourse.

“Let us be reminded that we are here together because of our collective desperation for the country to break away from discontent, poverty, corruption, criminality, and proliferation of drugs. These are the reasons why we have aspired for real change,” Duterte’s spokesperson Peter Laviña said in a statement.