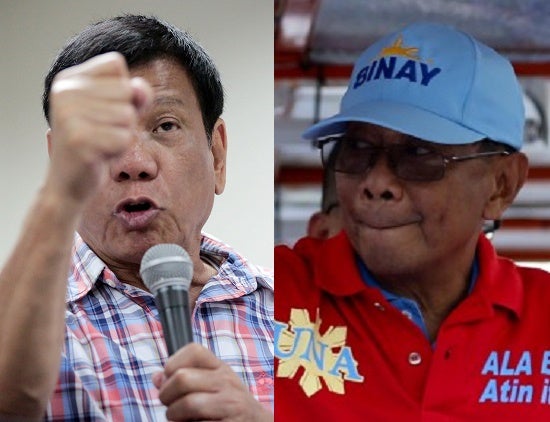 The camp of presidential aspirant Mayor Rodrigo Duterte on Saturday urged Vice President Jejomar Binay to face the Filipino people once and for all and explain his side on the corruption allegations being hurled against him.

Citing the Commission on Audit’s (COA) report that recommended sanctions against the Vice President over the allegedly anomalous construction of the P2.8-billion Makati City Hall Building II, Duterte’s spokesperson Peter Laviña said it appeared like Binay was “lying between his teeth” and “insulting the intelligence” of Filipinos.

“Based on the COA report and recommendation, we can say that the Vice President is lying between his teeth, insulting the intelligence of the Filipino people. Now is the perfect time for him to bare all and tell the Filipinos how he and his family were able to accumulate such a scandalous wealth,” Laviña said in a statement.

The COA’s 148-page special audit report on the allegedly overpriced parking building said Binay was administratively liable for gross misconduct, dishonesty and gross inexcusable negligence, graft and corrupt practices in connection with crimes that he allegedly committed while he was still Makati mayor.

The report said Binay should be meted out administrative disciplinary action for violation of COA circulars and memoranda as head of procuring entity from 2007 to 2010.

Laviña said Binay, who has been “dodging” official investigations by saying that he would just explain to the people, still had less than two months before the national elections to finally clear his name and explain his side on alleged “corruption spree.”

Duterte’s spokesperson added that corrupt leaders were the ones making the lives of Filipinos miserable.

“With the COA report saying Binay is liable for graft and corruption, the vice president is morally bound to bare all,” he said.

“As a people tired of lies and corruption, we should not allow ourselves to be taken into this kind of ride that will in the end, bring us to a tragic end. We have had enough of corruption that has brought poverty into the people — the time is calling for us to change,” Laviña added.