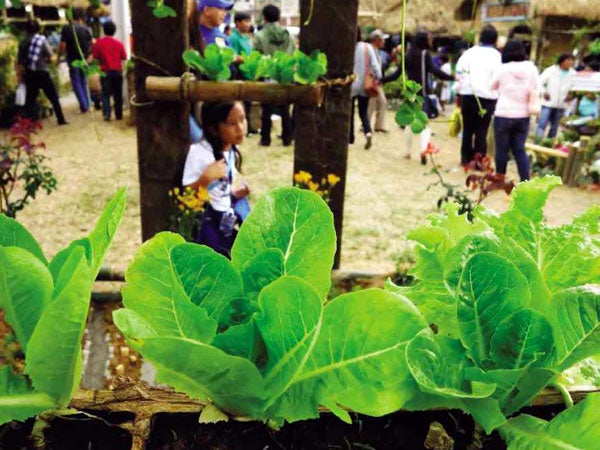 VEGETABLES put on display in Adivay Festival in La Trinidad town in Benguet province were introduced to local farmers by Chinese migrants and have become the province’s most lucrative commodity. In some schools, vegetables and other produce can be substitute payment for tuition fees. EV ESPIRITU

LA TRINIDAD, Benguet—Unlike schools in cities such as Baguio, some colleges in the Cordillera region have not raised tuition because their students pay their way with goods.

A college in Kalinga province gets paid in brooms produced by local farmers, said Marchan Mariano, Cordillera education supervisor of the regional office of the Commission on Higher Education (CHEd).

On Friday, students blocked the entrance to the CHEd office here to protest the new round of tuition increases. They barred the entrance with yellow tape, which bore the phrase, “Babala, CHEd nakamamatay (Warning, the CHEd is life-threatening).”

But Mariano said only three colleges of the more than 40 schools in the region had been allowed to raise tuition for the 2016-2017 school year.

Some of the schools have accepted goods in lieu of increased fees, he said. Students of Saint Louis College of Bulanao in Tabuk City, for instance, have asked school officials to allow them to pay in kind during examination period, he said.

Mariano reported a 15- to 20-percent decrease in enrollment for the second semester in the major universities in Baguio City and nearby Benguet province because some students took on jobs to raise tuition money.

“They usually return for the summer term or the first semester,” he said.

But only a 10-percent increase in college enrollment had been monitored during first semesters, Mariano said, which suggested that “more students did not return to school.”

Except for five colleges in Baguio and Benguet, no school in the other Cordillera provinces applied to raise tuition and other fees for the 2016 school term, Mariano said.

He said King’s College in La Trinidad and STI College and Saint Louis University (SLU) in Baguio were allowed to raise tuition. AMA Computer College and the University of the Cordilleras, both in Baguio, were unable to meet the CHEd’s requirements and were not permitted to raise their fees, he said.

King’s College was allowed a 20-percent increase of its P300-per-unit rate while STI would raise fees by 5 percent.

Mariano said the SLU tuition increase for incoming freshmen did not require consultations with parents, students and other sectors as prescribed by the CHEd.

Luke Bagangan, secretary general of Anakbayan Cordillera, said his group protested the new fee increases because these had prevented students from “exercising their right to education.”

Bagangan said they wanted the CHEd to review its rule allowing the automatic increase in tuition for incoming freshmen “without consultations.”

Froilan Wanagon, a youth leader in Kalinga, confirmed that a major university there had not increased tuition since 2014, although it had imposed additional miscellaneous fees.

Kalinga State University raised its fees in 2014, from P100 to P150 per unit for general courses that include agriculture and education, Wanagon said.