No room for doubt on Poe | Inquirer News

No room for doubt on Poe 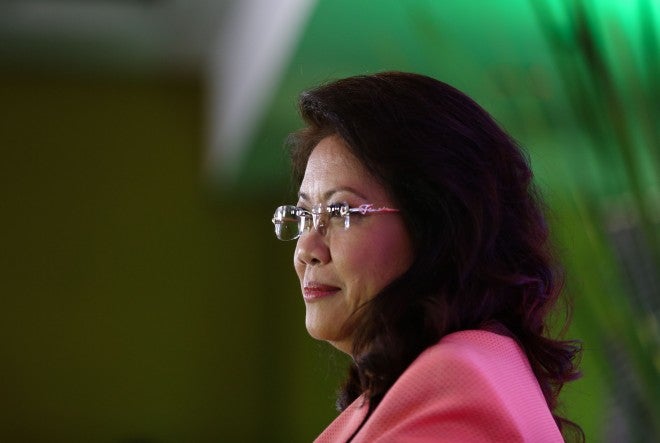 Chief Justice Maria Lourdes Sereno on Saturday insisted that there is no room for doubt in the Supreme Court’s majority ruling to uphold Sen. Grace Poe’s qualification to run for President, even as opponents of the landmark ruling cited a split within the majority of nine justices who voted to overturn the Commission on Elections (Comelec) decision canceling Poe’s certificate of candidacy.

In her extensive concurring opinion, Sereno sought to answer the questions raised on how firm the high court majority was in upholding the natural-born status and 10-year residency of Poe.

The decision said the Comelec had gravely abused its discretion in canceling Poe’s certificate of candidacy.

Without naming names, Sereno cited a particular dissent that apparently made the majority ruling appear weak.

“With the majority of the members of the Court declaring, by a vote of 9 as against 6, that petitioner Mary Grace Poe-Llamanzares has no legal impediment to run for the presidency, it is most unfortunate that one of the dissenting opinions opens with a statement that tries to cast uncertainty on an already tense situation,” Sereno wrote.

Associate Justice Teresita Leonardo-de Castro disclosed the other day that there was a “split” in the majority, saying that the nine who voted to qualify Poe differed on how to treat the citizenship and residency issues raised against her.

“Even the nine who voted with the majority did not have a uniform position on the issues,” she said.

Manuelito Luna, the counsel for former Sen. Francisco Tatad, one of the four petitioners for Poe’s disqualification in the Comelec, said the vote of seven meant that the ruling “binds no one.”

“Only seven justices, or less than the majority, voted to declare Poe presumptively natural-born and a resident of the Philippines for 10 years immediately preceding the day of the election,” Luna said in a statement on Saturday.

“It binds no one; it cannot become part of the law of the land or jurisprudence,” he said.

But Sereno insisted that there was a clear majority. By her account, out of the nine who voted to grant Poe’s petition against her disqualification, seven agreed to hold that Poe was natural-born. But only 12 of the full court of 15 justices participated in the voting on that particular question, she said, making it a clear majority of seven.

“Out of the 12 members who voted on the substantive question on citizenship, a clear majority of seven voted in favor of petitioner. As to residency, seven out of 13 voted that petitioner complied with the 10-year residency requirement,” Sereno said.

“These votes, as explained in the extended opinions submitted by the members of the majority, must be respected,” she added.

Based on the voting sheet, Associate Justices Alfredo Benjamin Caguioa and Diosdado Peralta were the two justices in the majority who did not want to put the citizenship question to a vote.

Caguioa and Peralta argued that the decision should only go as far as ruling that Poe did not commit material misrepresentation, with the intent to deceive, in saying that she was both natural-born and a Philippine resident of at least 10 years in her certificate of candidacy.

Caguioa explained his divergence from the majority on the citizenship issue.

“On this point I deviate from the majority opinion when it proceeded to rule on the question of the petitioner’s citizenship. Keeping in mind the nature of this court’s limited certiorari review, I believe that this court need not have made a definitive ruling on petitioner’s status as a natural-born Filipino citizen,” he wrote in his 11-page opinion, in which he was joined by Peralta.

“I concur, however, that the Comelec grossly misappreciated the evidence when it found that the petitioner deliberately intended to mislead the electorate when she stated that she is a natural-born Filipino citizen, knowing full well that she is a foundling,” he said.

Of the six, only Reyes opted not to issue his own dissenting opinion, joining Bernabe’s instead.

Sereno, who was vocal in supporting the rights of foundlings during oral arguments on the case, castigated the Comelec for shifting the burden to Poe to prove her citizenship.

“The standard proposed by the Comelec—physical proof of blood relation to a parent who is a citizen of the Philippines—is an impossible, oppressive and discriminatory condition,” the chief magistrate said.

“To allow the imposition of this unjust and unreasonable requirement is to sanction a violation of the Constitution and our obligations under existing international law,” she said.

Associate Justice Presbitero Velasco Jr., in his separate opinion, agreed with this point, saying that putting the burden of proving citizenship on foundlings “is as preposterous as rubbing salt on an open bleeding wound.”

“It adds insult to injury. The state cannot allow such unconscionable interpretation of our laws. Instead, the judiciary, as the instrumentality of the State in its role of parens patriae (parent of the nation), must ensure that the abandoned children, the foundlings, those who were forced into an unfavorable position are duly protected,” he said.

So did Associate Justice Francis Jardeleza, saying the Comelec held a “discriminatory interpretation of the Constitution” in requiring Poe to prove her natural-born status despite being “abandoned as an infant with unknown facts of birth and parentage.”

“It (Comelec) acted with ‘an evil eye and unequal hand,’ denying foundlings equal justice guaranteed by the same fundamental law. This is grave abuse of discretion,” he said.

Associate Justice Marvic Leonen said the status of foundlings as natural-born Filipinos could be inferred from the intent of the Constitution, acts of the executive and legislative branches, and the Philippines’ concurrence with international law.

“Doing justice and discharging our duty to uphold the rule of law require that we conclude that foundlings are natural-born Filipino citizens, absent any evidence that proves the contrary,” said Leonen.

“This is the inescapable conclusion when we read the provisions on citizenship in the context of the entire Constitution, which likewise mandates equality, human dignity, social justice and care for abandoned children,” he added. TVJ

SC rules in favor of Poe in DQ case

Duterte on Poe after SC decision: ‘Goodluck to her, I wish her the best’