‘She was a foreigner here as balikbayan’ 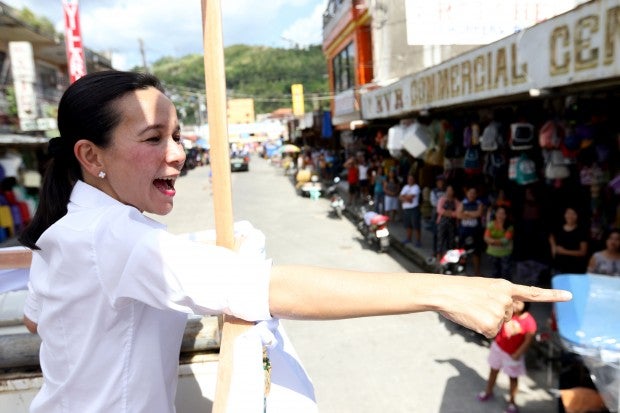 The defeated opinion upholding Sen. Grace Poe’s disqualification written by Associate Justice Mariano del Castillo focused on Poe’s abandonment of her homeland and characterized her return to the Philippines as tentative, while avoiding the issue of her citizenship.

The 70-page draft ponencia, now a dissenting opinion after Tuesday’s 9 to 6 ruling upholding Poe’s petition against the Commission on Elections (Comelec) ruling disqualifying her, found that Poe had failed to prove that she had the required period of residency in the Philippines to qualify to run for President.

The Del Castillo opinion, which reporters obtained through a court insider, is one of five separate opinions expected to come out now that the full ruling has been released.

Associate Justice Jose Perez wrote the majority opinion that upheld Poe’s claim of grave abuse of discretion against the Comelec.

Originally the assigned writer of the majority opinion, Del Castillo dealt at length with what he described to be shaky grounds on which Poe had anchored her claim of sufficient domicile in the Philippines.

“The petitioner not only formally abandoned the Philippines as her domicile, but she also renounced her Philippine citizenship by becoming a naturalized American citizen,” Del Castillo wrote.

“She preferred and chose to be domiciled in the United States than in the Philippines. And she did so not out of necessity but to permanently live there with her family,” he wrote of Poe, who was found abandoned as a baby in an Iloilo church in 1968 and who became a US citizen in 2001.

Del Castillo did not accept Poe’s assertion that her reestablishment of domicile in the Philippines must be reckoned from May 24, 2005, when she flew back after decades of living in the United States.

He pointed out that Poe only reacquired Philippine citizenship in July 2006, or more than a year later, and that she was here visa-free as an American citizen.

“She was a foreigner temporarily staying here as a balikbayan. Based on these, the petitioner’s imputation of grave abuse of discretion (against the Comelec) falls flat on its face,” Del Castillo said.

He said Poe’s stay in the Philippines was “not permanent,” “merely temporary” and at most “would be only for one year.”

Del Castillo also set aside Poe’s assertion that she had full intent to permanently reestablish her residence in the Philippines by uprooting her family from the United States and buying properties here.

The magistrate said such property acquisition “may also very well be for investment purposes only.”

He also pointed out how Poe used her US passport five times between her return to the Philippines in May 2005 to October 2010, when she renounced her US citizenship.

Del Castillo also held that Poe may not invoke “honest mistake” in declaring in her 2012 certificate of candidacy (COC) for the 2013 senatorial race that she would be a Philippine resident by six years and six months by the past midterm elections.

This meant that her residency by Election Day this year would only be nine years and six months.

“The intention to mislead can be deduced from the fact that an aspirant, although not qualified, makes it appear in his or her COC that he or she is eligible to run for public office when in truth he or she is not. Here, petitioner made it appear that she met the 10-year residency requirement when in fact she did not,” the magistrate said.

Del Castillo said Poe started her residence in the Philippines only in November 2006, as could be reckoned from her COC that she filed in 2012.

He said the phrase on the COC asking for a candidate’s “period of residence in the Philippines before May 13, 2013,” was “too plain to be mistaken and too categorical to be misinterpreted, more especially by one of her (Poe’s) education and professional stature.”

Del Castillo, however, did not touch on the matter of Poe’s citizenship, citing the pendency of the separate petition assailing the Senate Electoral Tribunal’s ruling that declared Poe natural-born and hence qualified to run for the senatorial race in 2013.

“[It is] … wise and prudent to withhold passing judgment at this time regarding petitioner’s citizenship. Indeed, it is tempting to seize this opportunity to sit in judgment of this issue on citizenship, which has generated so much attention, invited heated and vigorous discussion, and evoked heightened emotions… . However, loftier interest dictates that we take pause and exhaust all possible avenues and opportunities to critically study the issue,” he said.

“We believe that the resolution of the issue on petitioner’s citizenship must be carefully studied and deliberated upon. We venture to say that we may not only be dealing with foundlings per se. Any hasty or ill-considered ruling on this issue could open the floodgates to abuse by certain groups and individuals looking only after their own interest to the prejudice and undoing of our motherland,” he said. TVJ

No room for doubt on Poe

Read Next
No room for doubt on Poe
EDITORS' PICK
COVID-19 has infected more than 69,000 people globally
Xi’s early involvement in virus outbreak raises questions
The Najima Drive: Nissan’s MD drives #GoAnywhere adventures in new video series
Can Your Brand of Meat Be Trusted? Here’s How to Know You’re Eating Safe Meat
COVID-19 screening checkpoints remain for those going to Boracay
Can travel make you fall in love?
MOST READ
2,000 iPhones given for free by Japanese gov’t to passengers stuck on ship due to coronavirus
WATCH: Sarah Geronimo dances ‘fierce’ version of ‘Tala’
Duterte can be greatest President yet – Joma Sison
Poe to solons: If ABS-CBN franchise deemed extended, put it in writing or declare it
Don't miss out on the latest news and information.