5 years after the spark, Syria war at a critical juncture 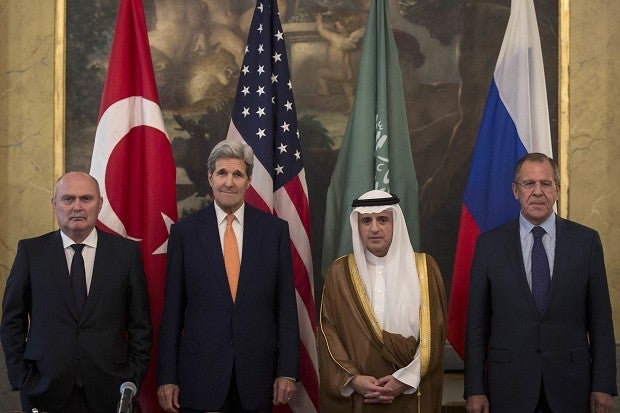 BEIRUT — After five years of bloodshed — after a quarter of a million deaths, and the flight of millions of refugees — Syria has arrived at a critical juncture: A diplomatic framework is in place to end the carnage, a two-week-old partial cease-fire is holding, and peace talks are set to resume in coming days.

“The indicators from a distance are all good,” said Bassam Barabandi, a Washington-based former Syrian diplomat who now serves as a political adviser to the Syrian opposition. But it’s an extremely fragile moment, and the way is still long, he added.

Few think fighting will end altogether, and the efforts could collapse again at any point. Bitter divisions over the future of President Bashar Assad threaten to scuttle any serious negotiations for a political transition in the immediate future. Talk is on the rise that a partition is the best case scenario.

Still, there are numerous indications that the war has reached a point when guns may start giving way to politics.

“We are finishing phase one and moving on to phase two,” Barabandi said.

At the heart of the current diplomacy: an internationally shared desire to put an end to a war that has unleashed Islamic extremists across the globe, destabilized neighboring countries and inundated Europe with refugees.

“International opinion is drifting away from the opposition and the idea of political change in Syria,” said Aron Lund, nonresident associate of the Carnegie Endowment for International Peace and editor of Syria in Crisis. “Much of the world just wants stability, an end to terror sanctuaries, a stemming of refugee flows. They don’t want to see Syria on the front page of their morning newspapers anymore.”

Five years have passed since the uprising began, first with a small protest in downtown Damascus on March 14, 2011, followed a few days later by larger protests in the southern city of Daraa in response to the arrest and torture of high school students who scrawled anti-government graffiti on a school wall.

Coming after a string of so-called Arab Spring uprisings that toppled dictators in Tunisia, Egypt and Libya, the protests triggered panic in the echelons of the Syrian power structure. Security forces responded with brute force. Within a few months, the confrontations morphed into an armed insurgency and the conflict slid into one of the most savage civil wars in recent history.

As the US, Iran, Hezbollah, Saudi Arabia, Turkey and ultimately Russia poured in weapons and cash to back up opposing sides of the war, the fighting became more brutal. Massacres were committed on a massive scale, and entire blocks in major cities were reduced to rubble.

Through it all, Assad has been unflinching, maintaining that he is fighting terrorism. The rise of the Islamic State group and al-Qaida’s branch in Syria, the Nusra Front, has eclipsed the original core of nationalist activists seeking an end to dictatorship — so completely that Assad claims that it’s a myth that the uprising began with the arrest of students in Daraa and subsequent protests.

“The whole story didn’t exist. It didn’t happen. It was only propaganda,” Assad said in a recent interview with German television ARD.

For ordinary Syrians who took part in the initial protests, there is still a sense of bewilderment at how quickly it all went down, and a feeling of immense, irreversible loss.

“I never imagined that the regime will last until 2016,” said Amer Matar, a Syrian journalist who was among opposition activists who took part in early protests. He was detained twice and tortured before eventually leaving the country, first to Turkey and then to Germany, where he has been living for nearly three years. His brother, Mohammad Noor, disappeared after IS kidnapped him more than a year ago.

“Syria will never be the same … I don’t think it will be one Syria,” he said.

Former US ambassador to Syria, Robert Ford, says he, like many other seasoned diplomats, underestimated the ability of the Syrian government to survive so long, not imagining that Iran, Hezbollah and Russia would intervene so heavily on Assad’s behalf.

Meanwhile, the United States was hesitant from day one to provide serious help to the opposition. Its top priority has been the fight against IS, and it is anxious to get everyone on board.

That, and Russia’s game-changing military intervention in Syria, led world powers to agree in November on a roadmap for a political transition that involves UN-supervised parliamentary and presidential elections within 18 months.

Building on the momentum, the US and Russia last month engineered a partial cease-fire that excludes IS and the Nusra Front. The cease-fire took effect on Feb. 27. Although limited, tentative and marred by sporadic violence, it mostly has held.

Peace talks are to resume on Monday in Geneva after a previous round collapsed because of a government offensive in Aleppo. At the heart of the talks will be such issues as a new constitution and elections, said Staffan de Mistura, the UN’s Syria envoy.

But negotiations could collapse over the seemingly insurmountable issue of Assad’s fate. Though the opposition dropped its demand that he step down before negotiations, it says it will not accept any process that doesn’t end with his removal. Assad has shown no sign that he is willing to go — and it’s not clear his international backers, including Russia, are willing to force him out.

Ford, a fellow at the Middle East Institute in Washington, is pessimistic about a political deal and says the cessation of hostilities may be only temporary. He is increasingly worried that Syria will be partitioned, unless a way is found to establish a credible and inclusive new government to preserve the country’s unity.

Lund doubts Syria can be glued together in the short term.

“Right now, we seem to be headed towards a situation where the opposition is broken and Assad is left as the only game in town, but is still too weak, too illegitimate, and too exhausted to patch things up and return Syria to being a functioning country,” he said.

Read Next
Duterte, Cayetano vow to distribute coco levy fund in a month if elected
EDITORS' PICK
Alex Eala wins Grand Slam on Independence Day: ‘I hope I made my contribution to the country’
Ahead of ONE: Full Blast II, Mongkolpetch warns Elias Mahmoudi: ‘Watch out for my fists’
Rare earth metals at the heart of China’s rivalry with US, Europe
PNP, PDEA destroy P25.8M worth of marijuana in Kalinga
G7 rivals China with grand infrastructure plan
Kai Sotto continues to inspire Filipinos by sharing his passions and stories with Smart Prepaid
MOST READ
Chel Diokno, Bro. Eddie, Ate Vi decline 1Sambayan 2022 poll nomination
1Sambayan names 6 choices to pit vs Duterte’s anointed in 2022
Groups slam Duterte ‘surrender’ to China
G7 rivals China with grand infrastructure plan
Don't miss out on the latest news and information.