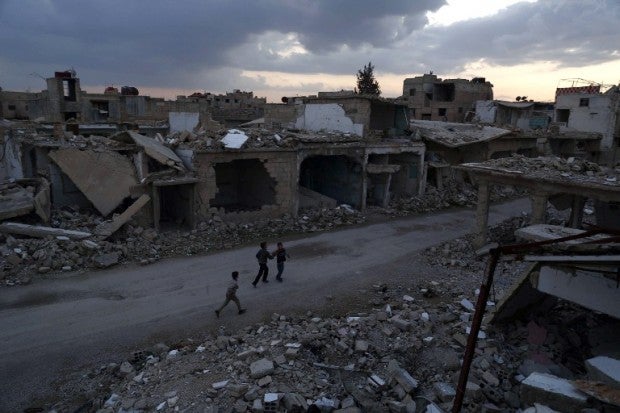 Syrian children walk past heavily damaged buildings in the rebel-held town of Douma, on the eastern edges of the capital Damascus on Feb. 27 on the first day of the landmark ceasefire agreement. Less than a day into a landmark ceasefire deal in parts of the country, residents say their usual routine has been thrown off without the usual sounds of artillery, rocket attacks, or helicopter-borne barrel bombs. AFP

BEIRUT, Lebanon—Syria’s war enters its sixth year next week with a glimmer of hope that a landmark ceasefire and a push for peace could help resolve a conflict that has sent hundreds of thousands fleeing to Europe.

Analysts say the past 12 months have been transformative—with Russia’s military intervention and pressure from the migrant crisis pushing world powers into renewed peace efforts.

Inspired by the Arab Spring uprisings of six years ago, protests erupted against President Bashar al-Assad’s regime on March 15, 2011.

A brutal crackdown sparked the civil war, which has since left more than 270,000 people dead and forced millions to flee towns and cities devastated by bombing and clashes.

Sporadic peace efforts over the next five years failed as fighting raged, with the emergence of the jihadist Islamic State group adding a terrifying new dimension to the conflict.

The last year has seen the war brought home to Europeans as never before, as hundreds of thousands of desperate Syrians arrived on Europe’s shores in the continent’s worst refugee crisis since World War II.

Experts say the wave of refugees put the Syria crisis front and center for the West, prompting a surge of diplomatic action.

“Europe’s fear about the refugee influx is one of the main factors that led to a reassessment of policies on Syria, making short-term stability a top priority at the expense of other political and geostrategic objectives,” said Karim Bitar, an analyst at the Paris-based Institute of International and Strategic Relations.

The biggest international effort yet to resolve the conflict was launched late last year, with diplomats from world powers agreeing a plan for a ceasefire, the creation of a transitional authority and eventual elections.

A partial truce—which does not include fighting against IS and other extremist groups—took effect on February 27.

“The Russian intervention was undoubtedly a turning point in the Syrian war,” said Bitar.

“It allowed a regime that was otherwise losing ground (to rebels) to consolidate its control over ‘useful Syria,’” or the most populous territories, he said.

The bombing campaign has bolstered Assad, helping him to firm up his grip on power despite years of opposition demands that he step down.

Against all expectations, the partial ceasefire has been holding, and Syria’s regime and fragmented opposition will hold new peace talks next week in Geneva.

But divisions cut deep and despite the changes on the ground few are holding out much hope for the talks.

Moscow is showing no sign of backing away from its longstanding support for a key ally.

“Russia’s intervention dotted the i’s in their policy that ‘we cannot let Bashar al-Assad fall,’” said Yezid Sayigh, an analyst at the Carnegie Middle East Centre in Beirut.

Washington, which has long supported Syria’s opposition, is also unlikely to compromise.

“The US wants at the very least a pledge that Assad will leave in the beginning, during, or at the end of a transitional period, which the Russians still don’t accept,” Sayigh said.

“This core issue is like trying to square a circle,” Bitar said.

If the negotiations collapse—as previous peace talks did in Geneva last month—Sayigh said the ceasefire is likely to soon follow.

“If the truce is not backed by a political accord, violence will return little by little,” he said.

The push for peace is also likely to run up against the myriad regional interests at play in Syria, experts said.

Sunni powerhouse Saudi Arabia and its Gulf allies are backing the opposition while Shiite Iran and its Lebanese ally Hezbollah are supporting Assad.

“Regional Sunni powers like Turkey and Saudi Arabia continue to walk a line that is much more intransigent and maximalist than (US President Barack) Obama’s administration,” Bitar said.

“In Syria, we allowed multiple proxy wars to develop that have nothing to do with the original demands of the Syrian people,” he said. “The Syrian people remain the victim of score-settling among world powers.”