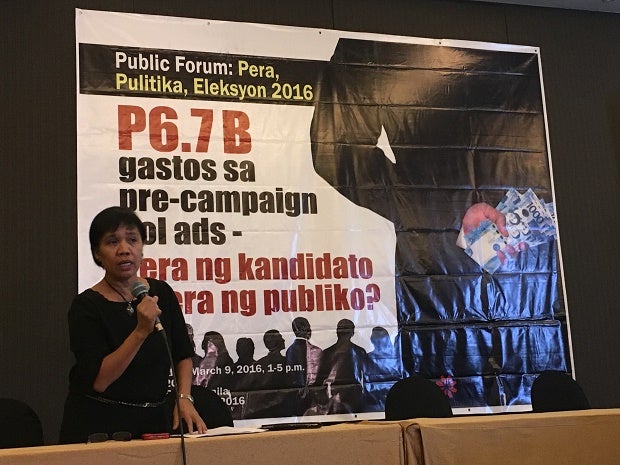 The upcoming national elections in May is a job application where an “integrity check” among candidates, being applicants for the highest posts in the land, is necessary.

(Because election laws do not cover pre-campaign spending, it seems like there are many secrets our candidates do not want to open up about.)

(This campaign is difficult because they are saying the same things. All of them are against corruption and love the poor. But the problem is when you ask all of them where their campaign funds came from, most of them are mum about it.)

Citing data from Nielsen Media, PCIJ reported that a total of 105,000 “social concern” ads worth P6.7 billion feature apparent candidates in the May polls from March 2015 to January 2016, ahead of the official 90-day campaign period which started last Feb. 9.

While acknowledging the political ads’ role in “information awareness” and “general familiarity” among voters, Mangahas said it is important for candidates to be “transparent, accountable, and inclusive” when it comes to their campaign spending.

Mangahas noted that Davao City Mayor Rodrigo Duterte, the last to declare his presidential bid, was featured in advertisements as early as March 2015, while the other presidential candidates Vice President Jejomar Binay, administration bet Mar Roxas, and Sen. Grace Poe aired ads between July and August last year—all months before the filing of their certificates of candidacies (COCs).

Citing data obtained by PCIJ, Mangahas added that the national candidates spent a bigger amount of money in political ads rather than investing in campaigns that educate the public on the Bangsamoro Basic Law.

The PCIJ also estimated that the candidates’ P6.7-billion pre-campaign spending could have provided 63,605 five-member families their basic food and non-food needs for a year, 23,103 permanent housing for victims of Supertyphoon “Yolanda,” 95,714,285 pairs of slippers for the poor, and 13,400 public school classrooms.

(It is not clear for whom is the mandate of the candidate? Is it for the voters or donors?)

(It is important that candidates should be honest as they are all united in saying they don’t want deceit. But they are silent when you ask them where they get their funds. They all seem to avoid answering it.)

Mangahas said some legal loopholes allow candidates to get away with overspending even before the start of the campaign period.

(We can see that there are loopholes in our laws because there are conflicts in the said laws. The election laws are clear but such are not applied even when (a candidate) has filed his or her COC as it is not yet considered the campaign period.)

For its part, the Commission on Elections’ (Comelec) campaign finance office admitted that it has no jurisdiction to go after candidates and their premature “policacies” (pol ads advocacies) unless the campaign period had started.

Citing Section 13 of Republic Act 9369 or the Election Automation Law, Comelec’s Atty. Sonia Bea Wee said “any person who files his COC within this period shall only be considered as a candidate at the start of the campaign period for which he filed his COC.”

(Upon filing of COC, a person should be considered a candidate. We have been advocating in Congress to revert it to its original definition but there is no progress yet.)

However, Mangahas said candidates could be held liable for their pre-campaign spending through the Bureau of Internal Revenue’s 30-percent Donor’s Tax on donations by strangers, and under Anti-graft and Corrupt Practices Act, which prohibits incumbent officials from receiving gifts.

(I hope the discussion in the public domain on these matters will be more open, mature and vigorous.)

Wee said the public can access the summary reports of the candidates’ ad contracts under the campaign finance tab of the Comelec website.

Mass media entities are required to submit to the Comelec a copy of all contracts for advertising, promoting or opposing any political party or the candidacy of any person for public office within five days after its signing.