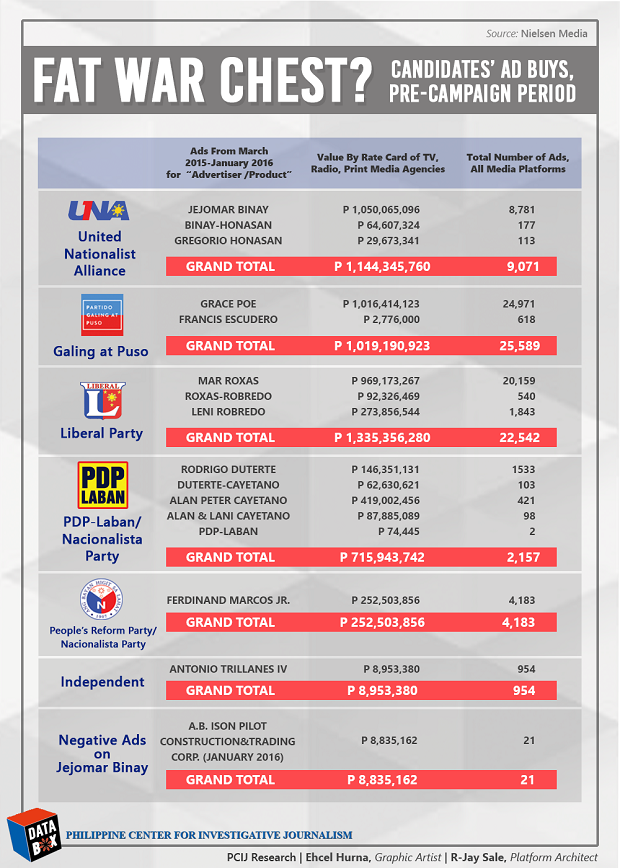 TO THE LAST, they sing the same song: They hate corruption. They love the poor. They mean well. They are true. They are good. They are pure.

Or at least that is what they say or claim in their political ads.

For at least four of the five candidates for president, five for vice president, 22 for senator, six party-list groups, and 17 candidates for local positions, trying to get themselves elected has meant spending like crazy on political ads.

And barely a month has lapsed since the official campaign period started last February 9 but at least 15 candidates for national posts have already acquired more than a third of a billion pesos worth of ads — or P373 million — from leading television network ABS-CBN alone, according to advertising contracts submitted to the Commission on Elections (Comelec).

Seven of the 15 candidates come from the apparently richly funded Liberal Party of President Benigno S. Aquino III. These early birds in the pol ads war include three candidates for president, three for vice president, and nine others for senator.

Yet while candidates in the May 2016 polls may get free pass from still porous election laws for their pre-campaign ads, they may have a hard time escaping from the legal and administrative liabilities that they and their donors may face, by the text and letter of anti-graft, civil service, and tax laws.

By reason and logic, the billions of pesos they have spent on pre-campaign ads could have come only from three sources: their own money, their yet unnamed donors, or public funds and purses.

By the data enrolled in their 2014 or latest SALN filing, many of the candidates who had already run up millions of pesos in ad bills before Feb. 9 have neither sufficient net worth nor cash on hand or in bank to be able to finance their pre-campaign ads.

Laws do not sleep or lie in wait during election campaigns, and in the view of four regulatory agencies – the Commission on Elections, the Bureau of Internal Revenue (BIR), the Securities and Exchange Commission (SEC), and the Office of the Ombudsman – these candidates and their donors have some serious explaining to do.

Anti-graft laws prohibit all public officials from receiving or accepting gifts of “manifestly excessive” value. Doing so is a possible case of “indirect bribery.” on the part of both the candidate and his/her donor, according to Comelec Commissioner Christian Robert Lim, head of the poll body’s Campaign Finance Office.

Internal Revenue Commissioner Kim Jacinto-Henares, meanwhile, told PCIJ she would be keen to find out if those who paid for the candidates’ pre-campaign ads had remitted the 30 percent donor’s tax due from donations from “strangers.”

The SEC, for its part, has issued a legal opinion in July 2015 in which it explicitly banned all corporations, both foreign and domestic, from donating to candidates and political parties, “or for the purpose of any partisan political activity.”

As for the Office of the Ombudsman, its senior officials say they are keen to monitor and review how the candidates have sourced money for their political ads, especially in light of the wealth they have declared in their respective statements of assets, liabilities, and net worth or SALN.

According to Nielsen Media’s monitoring reports, as of Jan. 31, 2016 and by the rate card of media agencies, three wannabe president comprise the Billion-Peso Club when it comes to pre-campaign political ads:

And while he decided to run only in December 2016, a fourth candidate for president, Rodrigo Duterte of the PDP-Laban Party, had also recorded a bill of P146,351,131 for his pre-campaign ads. 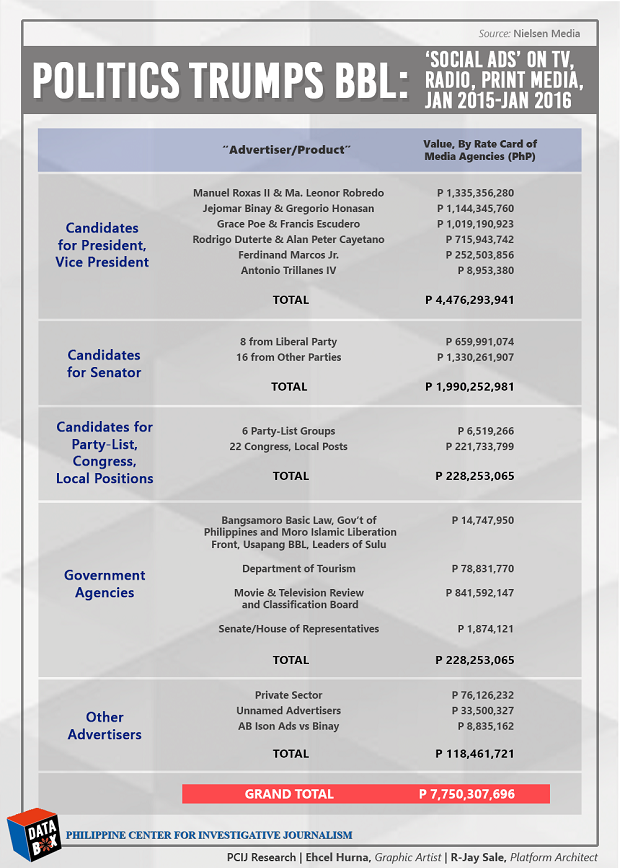 In the meantime, many wanna-be’s for Senate seats bought millions of pesos of pre-campaign ads as well.

From the richly funded Liberal Party, eight candidates for senator had incurred a combined total of P659,952,074 on pre-campaign political ads, as of Jan. 31, 2016:

Fourteen candidates for senator from the other political parties also spent a total of P1.33 billion on pre-campaign ads during the period.

Topping the list is Bongbong Marcos’s cousin, Leyte’s 1st District Rep. Ferdinand Martin Romualdez who acquired twice more ads than the former, P502,392,924, from August 2015 to January 2016. He is serving his third and last term in Congress. 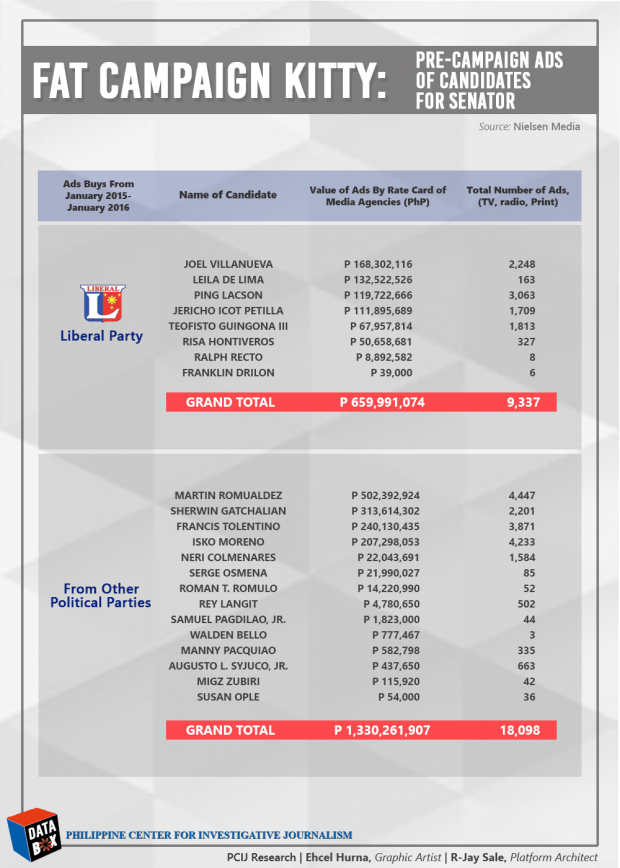 Next to Romualdez’s half-a-billion-peso ad buys are a few more big spenders, and a lot of smaller spenders. They are:

Too little for BBL

As a group, these candidates for national office accounted for P6.69 billion or 86.38 percent of the P7.75 billion in total “social concerns” ads purchased from TV, radio, and print media agencies, from January 2015 to January 31, 2016.

The remaining balance of P1.05 billion represents ads about “social concerns” by state agencies and the private sector, including a puny P14,747,950 that went to promoting the Bangsamoro Basic Law or BBL (The Aquino administration’s supposedly landmark reform legislation would be finally lost to chronic absenteeism in the House of Representatives and testy debates in the Senate.)

This figure even came from various advertisers, including a joint ad series of the Government of the Philippines and the Moro Islamic Liberation Front worth P6.48 million for the BBL throughout 2015, as well as the local officials and leaders of Sulu, and the Usapang BBL group.

By comparison, the Department of Tourism incurred a total ad spend of P76.83 million in 2015 for its “It’s More Fun in the Philippines” campaign. The amount is 11 times more than the government’s ad spend for BBL last year. – Malou Mangahas with research and reporting by Vino Lucero, Davinci Maru, and Earl Parreno, PCIJ, March 2016