Roxas defends Korina: Is it wrong for my wife to campaign for me? | Inquirer News
Close
menu
search

Roxas defends Korina: Is it wrong for my wife to campaign for me? 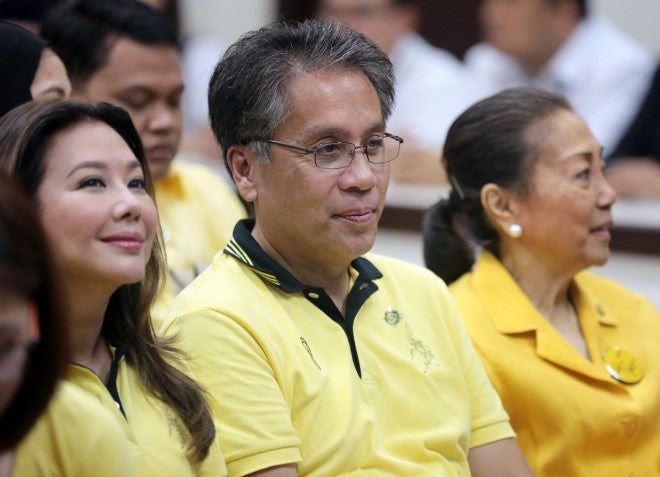 KAPALONG, Davao del Norte – Presidential aspirant Manuel “Mar” Roxas II defended his wife broadcaster and TV personality Korina Sanchez who has been criticized for her involvement in the Department of Agriculture’s (DA) distribution of checks and farm equipment.

Roxas said he saw nothing wrong with Korina being invited to help in the distribution.

He said his wife uses a private car and her own money when she goes around campaigning for him.

“Is it wrong for my wife to campaign for me?” he asked.

Roxas was here Tuesday morning to visit a cooperative of agrarian reform beneficiaries in a banana plantation.

He also attended a rally in Tagum City on Tuesday morning, and will attend another rally in Nabunturan, Compostela Valley in the afternoon.

The camp of presidential aspirant Davao City mayor Rodrigo Duterte earlier lambasted Korina over the broadcaster’s presence in events where the DA handed out checks and farm equipment to farmers.

“Korina is now an accomplice in a systematic shameless act that conditions the electorate to accept dole-outs in exchange for votes,” said Peter Laviña, spokesperson of Duterte.

“Have you no sense of decency and respect for the intelligence of the Filipino people?” Laviña asked.

Laviña said the administration is employing “creative vote-buying schemes” for its candidates.

In Tagum City on Saturday, Korina joined DA’s distribution of around P611-million worth of agriculture funds and equipment. She also joined DA in Kidapawan City in North Cotabato and Mexico in Pampanga.

“Is Korina employed by the Department of Agriculture? Why is she the one giving these out?” Lavina asked.

READ: Is Korina Sanchez working for Department of Agriculture?