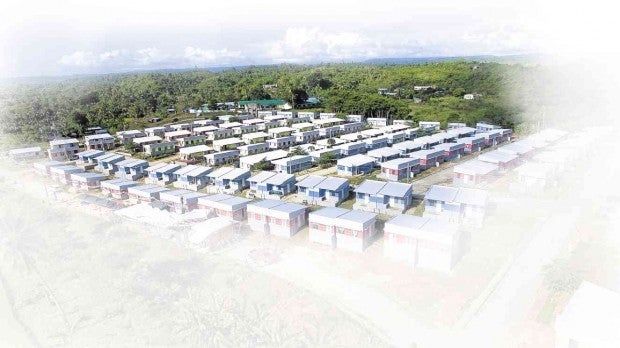 BAGANGA, Davao Oriental—Using a bolo, Marissa Bongo got her hands soiled to make sure there was no unsightly weed in her front lawn. The 34-year-old mother of three had to. It was an important day for her and for residents of MVP Tulong Kapatid Homes in Barangay Lambajon here.

The Bongos are just one of the families living in 266 disaster-resilient houses inside MVP (Manny V. Pangilinan) Tulong Kapatid Homes.

The village residents are among those left homeless when Typhoon “Pablo” (international name: Bopha) with winds of up to 280 kilometers per hour, devastated this town on Dec. 4, 2012. After the typhoon, people had lived in tents, bunkhouses and transitory homes.

“My family and I lived in a tent for a month. Then we moved to a makeshift house made of materials that my husband salvaged from the rubble,” Bongo said.

This time, however, they are staying in a place they can call their own.

Bongo has been living in MVP Tulong Kapatid Homes since 2014.

“As soon as our unit was finished, we moved in,” she said.

“The MVP people allowed us to move into our new home even if the other units were still being finished,” she added, explaining why the formal turnover on March 1 was somehow anticlimactic.

The 5-hectare village was built with the help of different MVP companies. Meralco, with the help of Davao Oriental Electric Cooperative, made sure there would be electricity, while Maynilad and the local water utility office provided pipes for water connections.

Makati Medical Center Foundation has provided medical equipment and furniture for the community health clinic located at the entrance of the village. Smart Communications Inc., on the other hand, provided the Mobile Equipment on Wheels to boost 2G and 3G signals in the town.

The idea of building a village started when TV5, through its Alagang Kapatid Foundation, raised more than P100 million in donations in a telethon immediately after Pablo hit Baganga and its neighboring towns of Boston and Cateel. Pangilinan offered help. Gov. Corazon Malanyaon accepted. And the rest is history.

But there were challenges along the way. There was land preparation. And, building contractors had to be replaced twice, until topnotch land developer D. M. Consunji Inc. (DMCI) took over in 2013.

The beneficiaries, however, did not lose hope even if there were delays in the project. As soon as a housing unit—which stands on a 60-square-meter lot and has a floor area of 26.8 square meter—was completed, pre-identified beneficiaries would immediately move in. All the units, built duplex style with two bedrooms, a bathroom and a kitchen, have been occupied even before its formal turnover.

Some of the beneficiaries were also tapped to help in the construction. At least 35 men were trained to acquire skills in house building. Some of them, after work at the MVP village was done, were hired in other housing projects.

DMCI’s Jorge Consunji, who attended the formal turnover rites, said his firm was “more than willing to help” and praised Alagang Kapatid Foundation for giving him the opportunity to be part of the project.

Napoleon Nazareno, vice chair of PLDT and Smart, said the DMCI-constructed houses “will be models of resilient homes.”