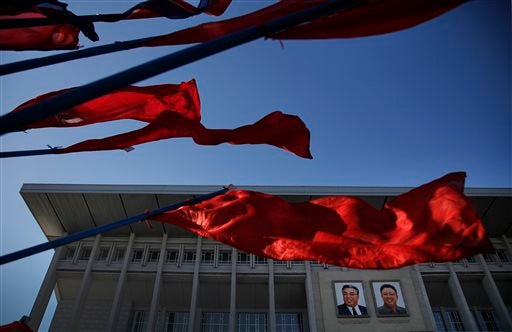 Portraits of the late leaders Kim Il Sung, left, and Kim Jong Il, right, hung at the entrance of the Pyongyang Indoor Stadium are seen in the background as North Korean national flags and Youth League flags decorate the venue on the “Day of the Shining Star” or birthday anniversary of Kim Jong Il on  Feb. 16, 2016, in Pyongyang. AP PHOTO

UNITED NATIONS, United States — The United Nations on Wednesday adopted the toughest sanctions to date on North Korea in response to its fourth nuclear test and rocket launch, but all eyes were on China and Russia to see if they fully enact the sweeping measures.

Among the unprecedented measures is a new requirement that all countries must inspect cargo destined for and coming from North Korea, in all airports and sea ports.

The resolution bans or restricts exports of coal, iron and iron ore and other minerals from North Korea, and prohibits the supply of aviation fuel including rocket fuel.

North Korea earns about $1 billion per year in coal exports — a third of all export revenues — and about $200 million annually from iron ore sales, US Ambassador Samantha Power told the council.

US President Barack Obama welcomed the measures as “a firm, united, and appropriate response” to the January 6 nuclear test and February 7 rocket launch.

“The international community, speaking with one voice, has sent Pyongyang a simple message: North Korea must abandon these dangerous programs and choose a better path for its people,” Obama said in a statement.

Banking restrictions will be tightened and governments will be required to ban flights of any plane suspected of carrying contraband destined for North Korea.

The resolution tightens an arms embargo by banning sales of small arms and bars vessels suspected of carrying illegal goods for North Korea from ports.

“These are among the toughest measures we have agreed against any country in the world, certainly the toughest ever against the DPRK,” said British Ambassador Matthew Rycroft, referring to North Korea by its official acronym.

Under the measure, UN member states will expel North Korean diplomats engaged in smuggling or other illegal activities.

A total of 16 individuals and 12 entities were added to a UN sanctions blacklist, including North Korea’s NADA space agency and its spy agency, the Reconnaissance General Bureau.

Luxury watches, snowmobiles, recreational watercraft such as Sea-Doos and sports equipment are banned from sale to North Korea, in sanctions targeting Pyongyang’s elites.

South Korean Ambassador Oh Joon said Pyongyang has spent an estimated $4 billion on its banned weapons program and argued that those funds could have covered the cost of humanitarian aid “for 40 years.”

“It simply pains me, pains all of us, to think about how the regime has been developing weapons by people who are starving,” he added.

Japanese Ambassador Motohide Yoshikawa described the resolution as “ground-breaking” but stressed that “the heart of the matter now is implementation” of the sanctions by China, North Korea’s largest trading partner, and other countries.

Power also called for a “robust and unyielding” follow-up to ensure the sanctions bite and singled out Russia and China as important players in that effort.

Chinese Ambassador Liu Jieyi said the resolution should “be a new starting point and a stepping stone” for renewed talks on dismantling North Korea’s nuclear program.

Russia echoed that view, with Ambassador Vitaly Churkin saying the resolution is designed to “shut down as much as possible the financing” of North Korea’s weapons program to push Pyongyang back to the negotiating table.

During the weeks of negotiations, China had been reluctant to endorse harsh sanctions out of concern that too much pressure would trigger the collapse of the pariah regime, creating chaos on its border.

China’s ambassador renewed Beijing’s opposition to plans by South Korea and the United States to deploy a new missile defense system on the Korean peninsula, saying it undermines efforts to re-start Korea talks.

The sanctions resolution did not target oil deliveries to North Korea and allows for exemptions to some export bans if a government can show that the revenue will not be used to develop North Korea’s military programs.

China, and to a lesser extent Russia, “will find loopholes, they always have,” to avoid fully implementing UN sanctions, said Roberta Cohen, an expert on North Korea at the Brookings Institution.

But Beijing “sees the mobilization of alliances, strong military alliances between the United States, South Korea and Japan and it sees that it can’t go on the way it has,” she added.

The latest resolution ushered in the fifth set of UN sanctions to hit North Korea since it first tested an atomic device in 2006.