US calls proposed sanctions on North Korea a ‘major upgrade’ 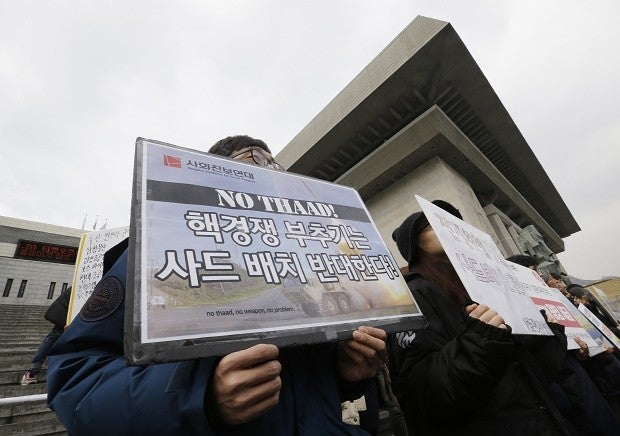 South Korean protesters shout slogans during a rally to oppose the possible deployment of the United States’ advanced defense system THAAD, or Terminal High-Altitude Area Defense, on Korea Peninsula, in Seoul, South Korea, Thursday, Feb. 25, 2016. The United States and China have reached agreement on a UN resolution that would impose tougher sanctions on North Korea as punishment for its latest nuclear test and rocket launch, UN diplomats said Wednesday. The signs read ” Oppose deployment of the THAAD.” AP

UNITED NATIONS — The United States on Thursday introduced a draft UN Security Council resolution that it said will significantly increase pressure on North Korea in response to its latest nuclear test and missile launch.

Ambassador Samantha Power said the draft, which for the first time would subject cargo ships leaving and entering North Korea to mandatory inspections, goes farther than previous sanctions and is meant to ensure North Korea will be held accountable for its actions.

“It is a major upgrade and there will be, provided it goes forward, pressure on more points, tougher, more comprehensive, more sectors. It’s breaking new ground in a whole host of ways,” Power said before heading into a closed-door meeting where the US planned to circulate the draft to all 15 council members.

The draft is the result of an agreement between the United States and China, North Korea’s main ally and Beijing’s involvement signals a policy shift with regard to its often erratic neighbor. The council is expected to vote on it over the weekend.

“We are opposed to any nuclear testing and the launch testing of ballistic missile technology and we hope this resolution will help to prevent further occurrences of this nature,” China’s Ambassador Liu Jieyi said following the meeting.

Jieyi said China was working very closely with other members of the Security Council and that he hoped the resolution “would achieve the objective of denuclearization” and result in “peace and stability.”

“I do think that it is indicative of how productive diplomacy can be. It’s not easy, but it certainly is an indication that the United States and China, when our interests are aligned, can cooperate quite effectively to advance the interests of citizens in both our countries,” Earnest said.

Power said the sanctions would also prohibit the sale of small arms and other conventional weapons to North Korea, closing a loophole in earlier resolutions.

Power said sanctions would also limit and in some cases ban exports of coal, iron gold titanium and rare earth minerals from North Korea and would prohibit countries from supplying aviation fuel, including rocket fuel to the country.

In addition, the resolution imposes financial sanctions targeting North Korean banks and assets and bans all dual use nuclear and missile related items.

“These sanctions, if adopted, would send an unambiguous and unyielding message to the DPRK: The world will not accept you proliferation. There will be consequences for your actions and we will work relentlessly and collectively to stop your nuclear program,” Power said.

She stressed that the sanctions targeted the ruling elite and not the North Korean people.

“The North Korean people have suffered so much already under one of the most brutal regimes the world has ever known,” Power said.

Items such as luxury watches, snowmobiles, recreational water vehicles and lead crystal were also added to a long list of luxury goods that North Korea is not allowed to import.

“We remain clear-eyed about the prospects of an immediate change in DPRK’s behavior but we have seen how robust sanctions can alter a government’s dangerous nuclear ambitions in other contexts,” Power said, referring to North Korea by the abbreviation for its official name, the Democratic People’s Republic of Korea.

North Korea started off the new year with what it claims was its first hydrogen bomb test on Jan. 6 and followed that up with the launch of a satellite on a rocket on Feb. 7 that was condemned by much of the world as a test of banned missile technology.

Over the past 10 years, North Korea has conducted four nuclear tests and launched six long-range missiles — all in violation of Security Council resolutions.

The UN draft follows a flurry of activity in Washington, including meetings between China’s Foreign Minister Wang Yi and US Secretary of State John Kerry on Tuesday, and with National Security Adviser Susan Rice on Wednesday.

The US, its Western allies and Japan, also pressed for new sanctions that go beyond the North’s nuclear and missile programs. But China, Pyongyang’s neighbor and supporter on the council, is reluctant to impose measures that could threaten the stability of North Korea and cause the country’s economy to collapse.

The United States has taken tougher steps of its own against North Korea, tightening sanctions and announcing it will hold formal talks with South Korea on deploying a missile defense system that China fears could be used against it as well North Korea.

Read Next
Obama says US to pursue campaign against ISIS ‘on all fronts’
EDITORS' PICK
What’s at stake for every fighter at ONE: NextGen
Gordon calls 2 Pharmally execs ‘Senate fugitives’ after no-show in probe
Isko Moreno bares ‘two-pronged’ approach to rehabilitate MSMEs
Legarda emphasizes role of ICC/IPs in nation building this IP month
Climate Change Commission and Nestlé PH to discover sustainability-focused solutions
NCR’s COVID-9 alert level may be downgraded from 3 to 2 soon — DOH
MOST READ
LJ Reyes says Paolo Contis made ‘no efforts’ to talk to her after their split
Yang’s Princeton degree raises eyebrows among senators
Gordon calls 2 Pharmally execs ‘Senate fugitives’ after no-show in probe
Drivers with no traffic violations can now renew licenses for 10 years
Don't miss out on the latest news and information.