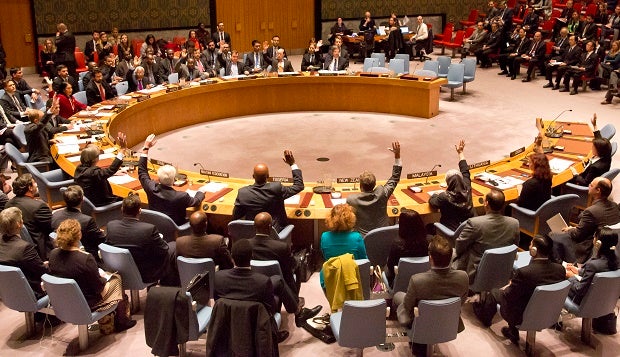 UNITED NATIONS, United States—The UN Security Council headed toward a vote on a new US-drafted resolution presented Thursday that would impose the toughest sanctions yet on North Korea over its nuclear and ballistic missile tests.

The draft text would require countries to take the unprecedented step of inspecting all cargo to and from North Korea, impose new trade restrictions and bar North Korean vessels suspected of carrying illegal goods from ports.

The United States, France and Britain pushed for a quick vote on the draft resolution, possibly as early as Saturday, but Russia said it needed time to study the text.

US Ambassador Samantha Power said the resolution, if adopted, would send “an unambiguous and unyielding message to the DPRK regime: The world will not accept your proliferation. There will be consequences for your actions.”

The measure “would break new ground and represent the strongest set of sanctions imposed by the Security Council in more than two decades,” she said.

The draft resolution was presented to the council after the United States and China, Pyongyang’s sole ally, agreed on the package of measures after seven weeks of arduous negotiations.

Russia indicated that a vote could take place next week.

“We are not in a position (to agree to a quick vote) because the draft is huge in details and there are all kinds of annexes that we should analyze,” he said.

“For the first time in history, all cargo going in and out of the DPRK would be subjected to mandatory inspection,” Power told reporters.

The measure provides for a ban on exports of coal, iron, gold, titanium and rare earth minerals from North Korea and would prohibit the supply of aviation fuel including rocket fuel.

Banking restrictions would be tightened and governments would be required to ban flights of any plane suspected of carrying contraband destined for North Korea.

Luxury watches, snowmobiles, recreational watercraft such as sea-doos and sports equipment were added to the list of luxury items banned from sale to North Korea, building on a previous resolution targeting Pyongyang’s elites.

A total of 17 individuals and 12 entities would be included on the UN sanctions blacklist, according to a US official.

‘Will have an impact’

The Security Council decided to impose new measures on North Korea after it carried out its fourth nuclear test on January 6 and test-fired a rocket on February 7.

Both tests were in violation of a series of resolutions barring North Korea from developing nuclear and ballistic missile programs.

“This resolution will be felt. It will have an impact on the DPRK,” said the US official, who asked not to be named.

The United States and China had been at odds over how to respond to North Korea’s recent tests.

China wants its reclusive neighbor to halt its nuclear weapons program and return to six-party international talks, maintaining that dialogue is the only way to curb Pyongyang’s behavior.

Beijing fears too much pressure could trigger the collapse of the pariah regime, creating chaos on its border.

After Washington and Beijing agreed on the draft resolution, French Ambassador Francois Delattre said “the conditions are now met” for a “strong and consensual” response from the Security Council.

The council has imposed four sets of sanctions on North Korea since it first tested an atomic device in 2006.

There are 20 North Korean entities and 12 individuals on the UN sanctions blacklist, which provides for an assets freeze and a global travel ban.

But a UN panel of experts said this month that a decade of sanctions had failed to prevent Pyongyang from scaling up its nuclear and ballistic missile programs.

After a raft of measures were adopted to restrict trade, banking and even ban luxury goods, the panel said it found “no indications that the country intends to abandon its nuclear and ballistic missile programs.”

“There are serious questions about the efficacy of the current United Nations sanctions regime,” the experts said.