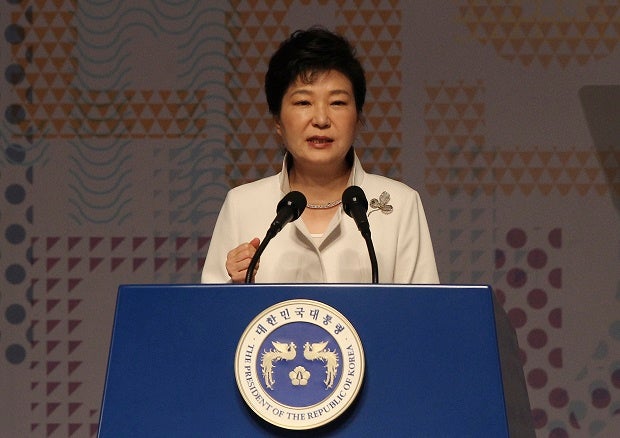 In a televised speech to mark the anniversary of a key date in Korea’s struggle against Japanese colonial rule, Park said failure to respond to the North’s “reckless provocations” would only result in further nuclear tests.

“If we leave them alone, they will continue,” said the president, who has significantly toughened her stance against Pyongyang in the wake of the North’s fourth nuclear test on January 6 and a long-range rocket launch last month that was widely condemned as a ballistic missile test.

“North Korea must clearly understand… that they can no longer maintain their regime through nuclear weapons,” Park said.

Her comments came as the UN Security Council prepared to vote Tuesday on a new US-drafted resolution that would impose the toughest sanctions yet on North Korea over its nuclear weapons program.

US ambassador to the UN Samantha Power said adoption of the resolution would send “an unambiguous and unyielding message to the DPRK regime: The world will not accept your proliferation. There will be consequences for your actions.”

The draft text would require countries to take the unprecedented step of inspecting all cargo to and from North Korea, impose new trade restrictions and bar North Korean vessels suspected of carrying illegal goods from ports.

Park said the draft, which has secured the approval of North Korea’s main ally China, showed the collective will of the international community to ensure that Pyongyang “pay the price” for its refusal to halt its nuclear weapons program.

“My government will leave the door for dialogue open, but until North Korea shows they are willing to change and to pursue denuclearisation, we and the international community will continue to pressure North Korea,” she said.

“The ball is now in North Korea’s court,” she added.

The UN resolution currently under discussion at the Security Council, represents a compromise between the United States and China, who had been at odds over how to respond to North Korea’s recent tests.

China wants its reclusive neighbour to halt its nuclear weapons program and return to six-party international talks, maintaining that dialogue—rather than sanctions—is the best way to curb Pyongyang’s behaviour.

Beijing fears too much pressure could trigger the collapse of leader Kim Jong-Un’s pariah regime, creating chaos on its border.

Already elevated tensions on the Korean peninsula are likely to rise further next week when South Korea and the United States kick off annual joint military drills.

North Korea views the exercises as provocative rehearsals for invasion, and has repeatedly demanded their permanent cancellation.

In an editorial to mark the 1919 independence movement anniversary, the North Korean ruling party newspaper, Rodong Sinmun, urged the defeat of “foreign forces” massing against the country.

“The US and South Korean hostile forces seeking to start a nuclear war against us are the root source of threat to peace and stability on the Korean peninsula,” the editorial said.