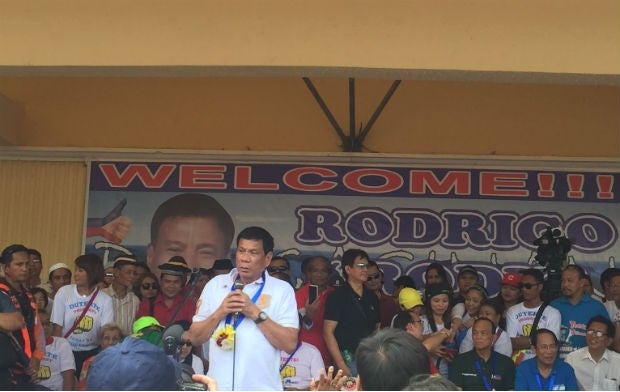 Duterte arrived in the vote-rich province on Wednesday morning in a bid to woo the Pangasinense votes.

“Well, I’ll just campaign direct to the people if I don’t get the leaders’ (support),” he said at the provincial capitol after meeting with Gov. Amando Espino.

Espino is a member of the Liberal Party, whose standard bearer is former Interior secretary Manuel “Mar” Roxas II.

Asked about his meeting with Espino, the tough-talking mayor remained mum.

“I cannot talk about it. I don’t have the authority,” he said.

He cited that in vote-rich Cebu, political stalwarts had expressed their support to his rival.

But despite his rivals’ backing from political clans, Duterte remains unfazed.

Duterte and his tandem Sen. Alan Peter Cayetano has been going around the country for their listening tour.

Dubbed as “Ronda-Serye,” the tandem talks directly to the people to present their platforms.