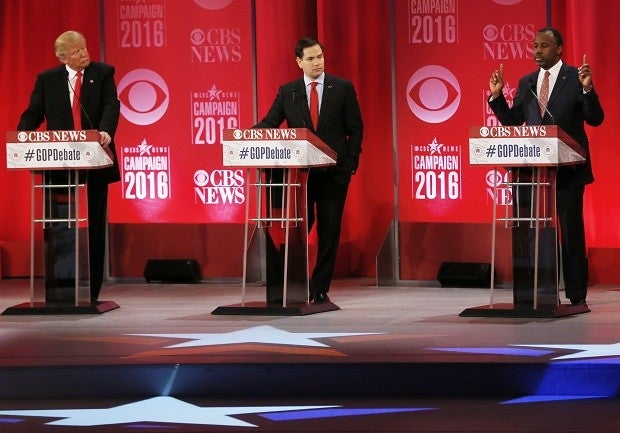 NEW YORK — Here’s a look at highlights from television coverage of Super Tuesday voting in the presidential campaign:

The broadcast networks ABC, CBS and NBC gave the campaign an hour of prime-time coverage, and Donald Trump put pressure on them right away.

Trump has dominated coverage almost since his announcement last summer, and was in the midst of a hybrid news conference and victory speech in Florida at 10 p.m. ET when the broadcast networks began their election specials.

That forced the networks to decide how much time they spent to giving an overview of the night, or whether they should train their cameras on the ratings magnet Trump. Of the three, CBS spent the most time on Trump as he spoke live and ABC resisted.

Trump’s strategy Tuesday melted some hearts. On NBC, analysts Nicolle Wallace and Eugene Robinson both said his decision not to give a traditional speech to supporters was designed to make him look more reasonable, even presidential, to doubters. Wallace, a former spokeswoman for President George W. Bush, has been a harsh critic of Trump.

“Tonight was an improvement over the last seven days,” she said.

READ: IN THE KNOW: US ‘Super Tuesday’ — what’s at stake

Cruz timed his speech to supporters for the 10 p.m. hour when the broadcast networks were on the air for their specials, but they didn’t cover him. Instead, CNN, Fox News Channel and MSNBC all aired his speech live.

While he was talking, Rubio made the rounds of the broadcast networks, giving one-on-one interviews to ABC, CBS and NBC to spin his rough night. It wasn’t easy: On CBS, Charlie Rose’s first question was “Are you getting out of the race?” Lester Holt on NBC began by asking, “Are you disheartened?” and ABC’s George Stephanopoulos pointed out, “You’re still without a win. How can you get the nomination?”

Earlier, Fox News pulled away from live coverage of Rubio’s speech to supporters for a studio discussion of whether it was time for him to get out of the race. CNN ignored Rubio’s speech.

Megyn Kelly and media analyst Howard Kurtz spent time on Fox News discussing whether the media had been fair in spending so much time covering Donald Trump during the campaign at the expense of time spent on other candidates.

As they talked, half of Fox’s screen showed an empty stage at Trump’s Florida headquarters, over the headline, “Awaiting news conference from Donald Trump.”

Over on NBC, Lester Holt and Savannah Guthrie discussed how much the prospect of electing the first woman president played into Hillary Clinton’s campaign.

“Like everything else in this campaign, it’s been overtaken by events,” Guthrie said. “And by events, I mean Donald Trump.”

Fox News Channel is not feeling the Bern.

Along with CNN and MSNBC, Fox covered Democrat Bernie Sanders when he took the stage in his home state of Vermont to speak to supporters. But only briefly. Fox cut away from Sanders’ speech at 7:33 p.m. ET, while CNN and MSNBC stayed with him until the speech ended 10 minutes later.

It wasn’t like there was a lot going on. Polls were still open in most of the states that were voting at the time. Instead of showing Sanders, Fox cut to an empty stage at Ted Cruz’s headquarters in Texas, and interviewed conservative columnist Charles Krauthammer and the author of the book, “Hands Off My Gun.”

“Help a brother out,” Williams implored. “Please FedEx some pulled pork, corned bread and beans. I’d appreciate it very much.”