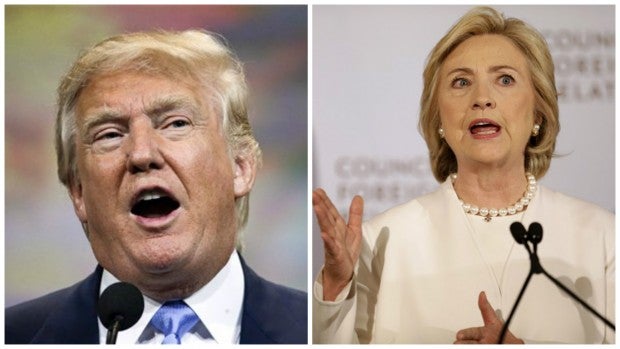 FAIRFAX, United States—White House hopefuls Hillary Clinton and Donald Trump are poised to pass a point of no return on Super Tuesday, if as expected they outrun their rivals on the biggest voting day of the primary season.

With just hours to go before polls open, the Democratic and Republican frontrunners fended off rivals and appealed to supporters in a dozen states, a day before they head to polls.

If they win big as the presidential nomination race broadens following a string of statewide votes, it could spell doom for their challengers.

Clinton was riding high after thrashing rival Bernie Sanders in South Carolina over the weekend, securing an astronomical 86 percent of the African-American vote.

But she was leaving nothing to chance, traveling to multiple states to urge a strong turnout.

“I need your help to go and vote tomorrow, to bring people to vote with you,” she implored a crowd in Springfield, Massachusetts on Monday.

She also took aim at the increasingly hostile campaign rhetoric on the Republican side led by the brash real estate mogul Trump.

“I really regret the language being used by Republicans. Scapegoating people, fingerpointing, blaming. That is not how we should behave toward one another,” she told several hundred people at a university in Fairfax, Virginia.

“We’re going to demonstrate starting tomorrow on Super Tuesday, there’s a different path that Americans ought to take.”

Trump, whose incendiary campaign has turned US politics on its head, has a political target on his back, with mainstream favorite Marco Rubio intensifying his personal attacks and stressing Trump would have serious weaknesses in a general election.

The Florida senator warned supporters in Tennessee that US media and critics will jump on Trump “like the hounds of hell” if he wins the nomination.

“They’ll shred him to pieces and then get Hillary Clinton elected,” Rubio said, insisting that he is better positioned to defeat Clinton.

But Trump is clearly in the driver’s seat. He is leading in polling in at least eight of the 11 Super Tuesday states.

Trump hit back hard against Rubio, calling him “Little Marco,” mocking him for sweating on the campaign trail and warning Rubio could not stand up to strong men like Russian President Vladimir Putin.

Super Tuesday will unquestionably be a gut check for the Republican Party.

It will also test whether Rubio’s newfound aggressiveness toward Trump — the 44-year-old senator has attacked his rival’s business dealings, temperament, age, policy platforms and hairstyle in recent days — will have an impact on voters.

READ: Anxious to slow Trump, both Rubio and Cruz go after him

Trump is “the Bernie Madoff of American politics,” Rubio told Fox News, referencing the former investment advisor jailed for life for committing the largest financial fraud in US history.

Trump’s inflammatory rhetoric during the campaign, accusing Mexico of sending “rapists” and criminals across the border and urging a ban on Muslims entering the country, would have been the undoing of a normal candidate.

But all signs show 2016 is far from normal, with a fiercely angry electorate keen to back an outsider who scornfully attacks the establishment.

Trump has shrugged off the criticism, including Clinton’s.

“Hillary says she doesn’t like my tone,” Trump told a crowd of some 3,000 in southwester Virginia.

“The world is a mean and evil place, we need a strong tone.”

In the latest controversy, Trump came under withering criticism from Republican and Democratic candidates alike for not immediately disavowing the support of David Duke, a white supremacist who once led the Ku Klux Klan.

The party’s flagbearer in 2012, Mitt Romney, joined the chorus of outrage, tweeting that Trump’s “coddling of repugnant bigotry is not in the character of America.”

Trump sought to put the issue behind him, blaming it on a “very bad ear piece” that prevented him from accurately hearing the question about Duke, and repeating his prior disavowal of the white supremacist.

If Trump sweeps the South, where many of the Super Tuesday races are taking place, it could be lights out for his Republican challengers.

Like Rubio, rival Cruz warned that a vote for Trump was a vote for Clinton in November.

“If Donald Trump is the nominee, Hillary in all likelihood wins,” arch-conservative Cruz told a rally in his home state of Texas.

The Lone Star State is the largest prize Tuesday, and Cruz is banking on winning there. But he trails in every other Super Tuesday state, except for Arkansas.

Nearly 600 Republican delegates are up for grabs Tuesday, close to half of the 1,237 needed to secure the nomination.

Some 865 Democratic delegates are at stake, about 36 percent of those needed to win.