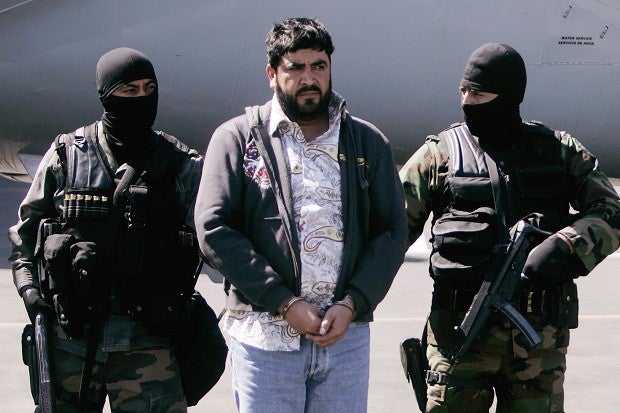 In this Jan. 21, 2008 file photo Mexican federal police officers escort Alfredo Beltran Leyva, known as “El Mochomo”, after his arrest upon his arrival to Mexico City’s airport. Lyva, the accused leader of a Mexican drug trafficking cartel who authorities say once maintained close ties to Joaquin “El Chapo” Guzman pleaded guilty in federal court in Washington on Feb. 23, 2016, admitting that he helped ship tons of cocaine from South America to the United States. The plea from Leyva, who was captured in Mexico in 2008 and extradited two years ago, comes weeks after Guzman, the notorious drug kingpin, was captured by Mexica authorities following a prison escape. AP FILE PHOTO

MEXICO CITY — The common-law wife of drug lord Joaquin “El Chapo” Guzman said Monday that his health problems have gotten “a lot worse” because guards at a maximum-security prison rouse him for head counts, interfering with his sleep.

Emma Coronel is the mother of Guzman’s twin daughters. She told the Radio Formula station that Guzman is having problems with nervousness and anxiety, because he isn’t sleeping at the Altiplano prison west of Mexico City.

Authorities have been waking Guzman every few hours for head counts. He embarrassed authorities by escaping the prison last July. He was recaptured in January.

Coronel said she thinks authorities are trying to kill Guzman.

National security commissioner Renato Sales, whose responsibilities include overseeing federal prisons, said at a news conference Monday that Guzman’s human rights are in no way being violated.

Sales pointed out that Guzman has escaped twice from Mexican prisons.

“Shouldn’t someone who twice escaped from maximum security prisons be subject to special security measures? The common sense answer is yes,” Sales said.

Coronel quoted Guzman as saying he isn’t allowed to exercise in open air, but doesn’t care and only wants to be allowed to sleep.