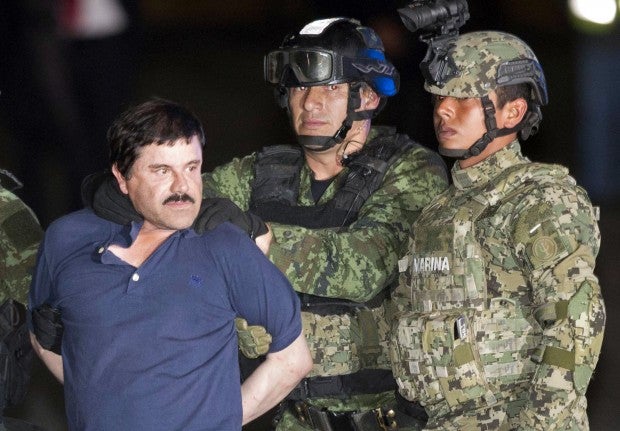 FILE – In this Jan. 8, 2016 file photo, Joaquin “El Chapo” Guzman is made to face the press as he is escorted to a helicopter in handcuffs by Mexican soldiers and marines at a federal hangar in Mexico City, Mexico, following his recapture six months after escaping from a maximum security prison. Guzman’s lawyers said Friday, Feb. 19, 2016 he told them that guards at Mexicos Altiplano prison wont let him sleep, and that plans to make a movie about his life with Mexican actress Kate del Castillo are still on. (AP Photo/Eduardo Verdugo, File)

LOS ANGELES — The ex-beauty queen wife of Mexican drug kingpin Joaquin “El Chapo” Guzman has blasted the Mexican government in a TV interview, claiming that they turned her loving husband into the world’s most wanted criminal.

Emma Coronel told the US Spanish-language Telemundo on Sunday that Guzman is an intelligent and affectionate man, and that she had no proof that he was in the drug trade.

“I don’t know if they did it on purpose or to cover up more important things, because the things they are bringing out and saying seems highly exaggerated.”

Coronel, the mother of Guzman’s US-born twin girls, added: “I have no knowledge that he trafficked in drugs.”

“El Chapo” was recaptured on January 8, six months after he tunneled his way out of a maximum security prison.

He was returned to the same prison he escaped from, the Altiplano, some 90 kilometers (55 miles) west of Mexico City.

Coronel denied that Guzman was one of the world’s richest men, and said she had no idea where the billions of dollars Guzman allegedly has are located.

“I don’t know where they get that he is bloodthirsty, even a rapist,” she said. “It seems very unjust to be saying such outrageous things about him.”

Everything being said about Guzman “are mere suppositions, because he has not been judged or sentenced,” she said.

To prevent another escape, prison authorities at the Altiplano assigned two permanent guards in front of his cell, with a camera on top of their helmets to watch his every move. They also regularly move Guzman to a new cell without warning.

A dog also tastes his food before it is served to him to thwart any poisoning attempt.

Guzman and Coronel were reportedly married in 2007 in the northern state of Durango, when she was 18 years old.

Coronel said she feared for her 61- year-old husband’s life, saying that he’s being mistreated in prison as payback for embarrassing the government by escaping last year.

“They don’t let him sleep, he has no privacy to go to the bathroom, they don’t even let him go walk in the patio,” she said.