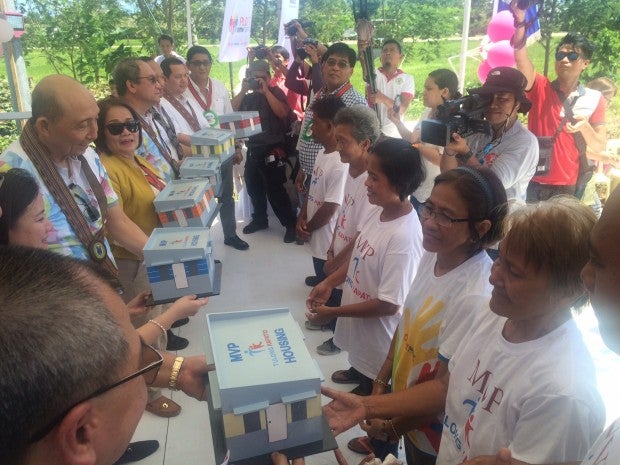 Government officials and executives of the MVP group of companies symbolically turn over model homes to beneficiaries. A total of 266 housing units were formally turned over to victims of Typhoon Pablo in Baganga, Davao Oriental. Photo by Nico Alconaba/INQUIRER MINDANAO

BAGANGA, Davao Oriental — A total of 266 housing units were formally turned over to victims of Typhoon Pablo here on Tuesday noon.

The houses, known here as the MVP Tulong Kapatid Homes, were constructed through the efforts of the different Manny V. Pangilinan-run companies like TV5, PLDT, Smart Communications, among others.

The beneficiaries are among those left homeless by Typhoon Pablo in December 2012. Residents started occupying the  Duplex and Triplex-type homes in 2014 when some of the units were completed. Tuesday’s event was just the “formal turnover” of the houses to the beneficiaries.

Governor Corazon Malanyaon said she could “not thank enough the MVP companies and Manny V. Pangilinan himself for their help.”

“I am grateful for them for coming in during our most difficult time,” Malanyaon said.