SAN FERNANDO CITY, Pampanga—A two-year-old girl was probably one of the youngest in crowd that gathered here on Tuesday to see the candidates of Partido Galing at Puso led by its standard-bearer, Senator Grace Poe and running mate, Senator Francis “Chiz” Escudero.

Carmen Agang,39, brought with her at the Covered Court in Northville 14, Barangay (village) Calulut, her two children—a four-year-old son, and her daughter, Czanelle, who she said is just barely two years old.

Czanelle was holding a paper fan with the name and photo of senatorial bet Roman Romulo. 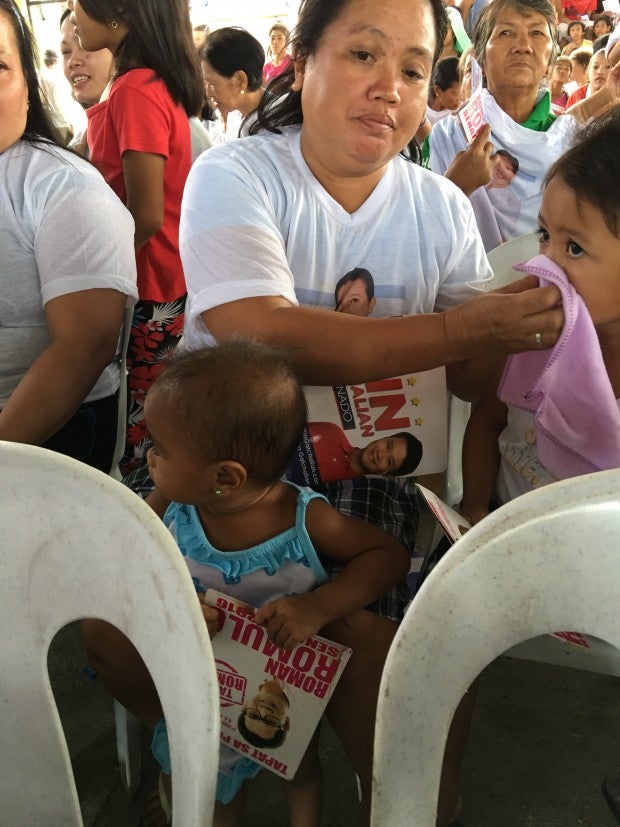 Carmen Agang brings with her her two children in the campaign rally of Grace Poe and her Senate slate. MAILA AGER/INQUIRER.net

Asked why she brought her kids at the sortie, Agang said: “E walang kasama sa bahay (No one will babysit them).”

Agang, who was wearing a white t-shirt with Poe’s name and image on it, said she would vote for Poe in the May elections.

Another young girl who was also holding a poster bearing “Vote Poe for president” was also seen at the crowd. 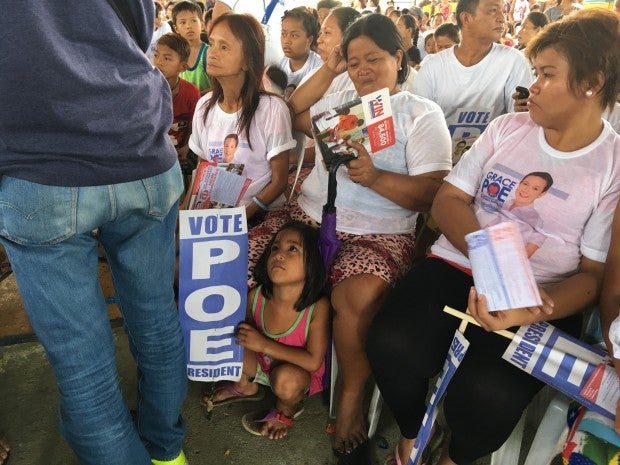 Many kids were seen holding campaign paraphernalia, lingering and playing while senatorial bets were giving their respective speeches.

Senatorial bets Neri Colmenares and Edu Manzano were first to arrive at the venue.

Actor Manzano, who received a rockstar welcome from the crowd, willingly hugged some of his fans and even kissed an old woman. 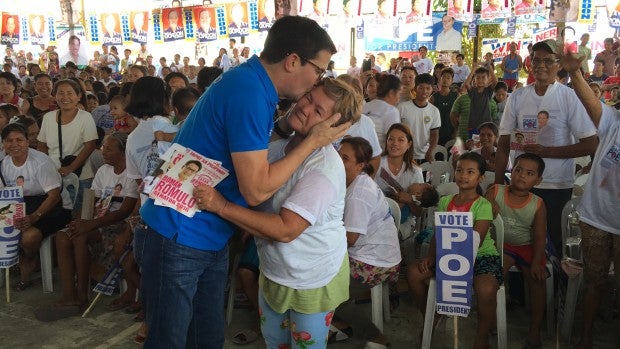 The crowd’s excitement, however, lasted only when he started giving his speech.

Before this, a host played games with the audience while waiting for the candidates, giving away baller IDs of candidates as prizes.

One of the games played was for the audience to guess the candidates and personalities that the host would describe.

The first question asked was who was Poe’s father, which was easily answered by the crowd who chanted the name of the late action king Fernando Poe Jr.

But when the host asked about the name of re-electionist Senator Vicente “Tito” Sotto III’s wife, a woman behind the media covering the event, repeatedly shouted the name Helen Vela.

Thank God the woman did not take the microphone to give her answer as Sotto is married to actress Helen Gamboa, and no to Vela. IDL