Inday Sara Duterte pays tribute to ‘Digong’: Education is everything 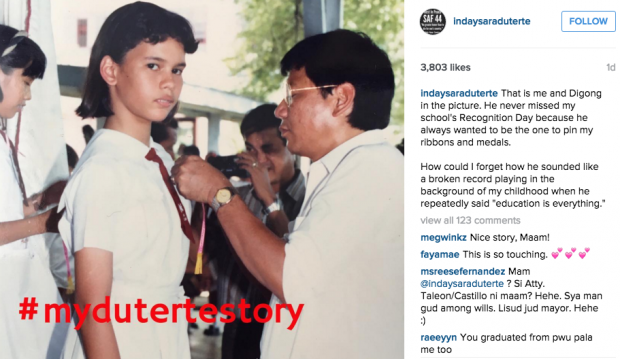 Many knew Rodrigo Duterte as the tough-talking mayor of Davao City.

But her daughter Inday Sara Duterte revealed his soft-side on Wednesday as she shared a touching story of her and her father using the hashtag #MyDuterteStory.

The hashtag has been used to share stories about the mayor on social media.

Inday Sara shared a picture showing “Digong,” her father’s nickname, pinning ribbons and medals during one of her Recognition Days.

“How could I forget how he sounded like a broken record playing in the background of my childhood when he repeatedly said “education is everything,” she said.

She said her father “did not emphasize excellence in academics though. The medals were merely a bonus.”

Several years ago, she recalled how she was having a hard time in law school and wanted to talk to a lawyer.

“One late evening several years ago, I was having a hard time in my third year of law school and I wanted to release a good cry. I did not call Mama because I did not want her to worry about me,” she said.

“I wanted to talk to a lawyer. I rarely talk to my father. We have a love-hate relationship and I can imagine Digong’s surprise when told by his aide that I asked for him to call me,” she added.

She said she was speechless when she heard her father’s voice.

“Every word disappeared in the surge of emotions. I could only cry. His first question was “asa ka (where are you)?” she said.

She said she “howled like a wounded wolf” when she heard those words.

“Then I sensed that he was already alarmed as he repeatedly asked me where I was. At that point, I thought, he could be thinking I was raped,” she said.

“But you see, I was dejected. I cried non-stop — like a dying dog,” she added.

She said there was silence at the other end of the phone before her father asked,  “Buntis ka? (Are you pregnant?)”

“That was the moment when I started to laugh. I laughed so hard, really hard — like a hyena desperate for air. That kind of face,” Inday Sara said.

“I thought to myself — why do men think women who call them crying are pregnant. Gentlemen, why?

As I continued laughing, he blurted out “nabuang ka (are you going crazy)?

Inday Sara finally explained why he wanted to talk to his father.

Her father’s advice was simple.

“I could hear the exasperation in his voice as he retorted: “The answers are not in your tears. Go back to your books!”

“Yes! That was the very reason I wanted to talk to a lawyer — no comforting words, no baby bunny stories. I just wanted to listen to the heartless stop-crying-because-it-will-not-get-you-anywhere answer.”

Inday Sara said she ended the call and looked at her books and told herself, “”I’m hypothetically pregnant so I can cry myself to sleep.”

She recalled how her father cried when she passed the bar examinations.

“Someone told me my father cried when he learned that I passed the Bar Examinations. I think he cried because I did better than him and that made him successful,” she said.

“I also think he cried because I am his personal trophy in making sure that the next generation get the education that they needed,” she added.

She said her father “cried tears of joy.”

“And yes, I think he cried tears of joy.”

“Because I was not a pregnant highs-chool drop-out.” TVJ

Make him President, says Sara Duterte as she posts photo of own COC for Davao mayor

Read Next
Throwback: Inquirer docu on Edsa People Power Revolution’s 20th year
EDITORS' PICK
Look Through: Super Typhoon Karding barrels through parts of Philippines
Do all the things you do, faster
POGOs not linked to Illegal online gaming, says Pagcor
House energy committee chair Arroyo bats for cheap electricity
Metro Manila now at moderate risk for COVID-19 — DOH
Motorcycles, smartphones, and cash prizes up for grabs in TNT’s ‘Tuloy Ang Saya’ Raffle in Mindanao
MOST READ
Robredo supporter tackles elephant in room: No massive fraud in 2022 polls, surveys were just right
Comelec invalidates win of sitting governor in Negros Oriental
‘Shopee’ trends on Twitter after Toni Gonzaga becomes its new endorser
DepEd: We are in a crisis situation in education sector
Don't miss out on the latest news and information.