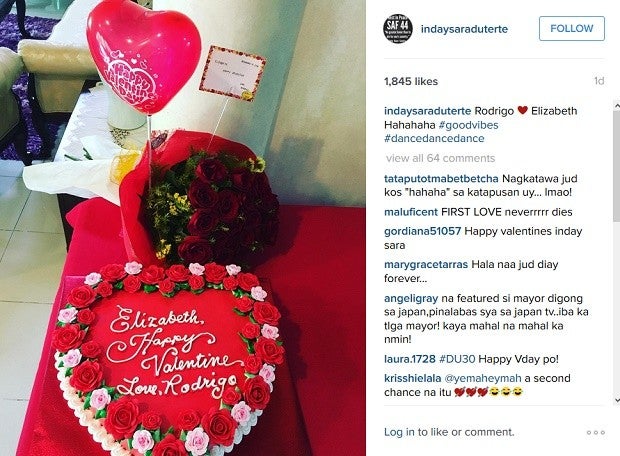 “Rodrigo <3 (loves) Elizabeth,” former mayor Sara Duterte teased as she posted on Instagram a photo of a balloon, flowers and a heart-shaped cake from her father Davao City Mayor Rodrigo Duterte.

The camp of the incumbent mayor, who is eyeing the presidency, confirmed that Duterte on February 14 visited his former wife, who is the mother of Sara, Davao City Vice Mayor Paolo and Sebastian.

In a statement, the Duterte camp said the controversial and “tough-talking” mayor is a “thoughtful and affectionate man.”

“Despite being annulled from his wife, Elizabeth Zimmerman, for more than a decade now, the PDP Laban presidential candidate has not burned bridges with his former wife.

The two were together for 27 years before a court nullified their marriage based on a petition by Zimmerman.

It was earlier revealed that Zimmerman is suffering from cancer.

Duterte, who claims that he has two wives and two girlfriends, is now living with his common-law-wife Honeylet Avanceña. They have an 11-year-old daughter named Veronica. CDG

READ: Duterte hedges when asked on future with Honeylet