Mexico leader in first visit to city of mass disappearance 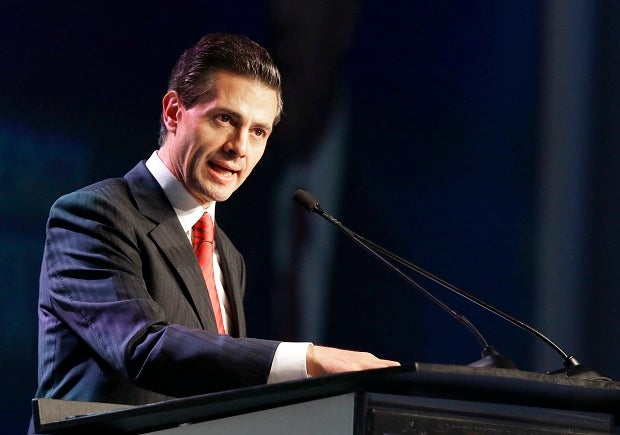 IGUALA, Mexico—Mexican President Enrique Pena Nieto visited Iguala on Wednesday for the first time since 43 students vanished from the southern city in 2014 and defended his government’s much-maligned investigation.

Some residents said they were disappointed that it took the president 17 months to finally visit the city in Guerrero state, and they complained that violence has even worsened since.

Pena Nieto came for the national Flag Day celebration, but the tragic story of the students has overshadowed Iguala’s significance as the birthplace of the nation’s colors 195 years ago.

“Iguala is a symbolic town in our national history. It cannot remain marked by this tragic event,” Pena Nieto said after watching a giant flag raised on a hill.

“Its people deserve to be known for their strengths, their qualities and their strong character to achieve things for their community,” he said as troops stood on a football field.

His visit comes as independent foreign investigators and parents of the students continue to question the official probe into what happened to the trainee teachers.

Scores of students from the nearby rural teacher college of Ayotzinapa were attacked by Iguala police on September 26, 2014, after the young men hijacked buses that they wanted to use for a future protest.

That same night, according to the authorities, the officers took 43 students and handed them over to the Guerreros Unidos drug cartel, which killed them, incinerated their bodies at a garbage dump and tossed the remains in a nearby river.

But experts from the Inter-American Commission on Human Rights and Argentine forensic investigators say there was no scientific proof that a large fire was set at the dump.

Attorney General Arely Gomez has since vowed to conduct new forensic tests at the landfill and look at new lines of investigation.

The role of the army has also been questioned, with the commission experts calling for a probe into whether soldiers failed in their duty to protect the students. Iguala is home to an army battalion.

Pena Nieto defended the investigating, saying in his speech that the government has undertaken a “vast institutional effort to obtain justice through a deep, transparent and open investigation” with the collaboration of international groups.

The probe led to the discovery of mass graves with dozens of bodies around Iguala not connected to the 43 students, revealing the extent of the terror that residents have endured amid gang turf wars.

Hundreds of troops and police guarded the city for Pena Nieto’s visit on Wednesday, creating a traffic nightmare.

“He’s not welcome in this city because he hasn’t done a good job. He has done nothing to resolve the violence,” said Jose Salazar, 32, standing outside his wood furniture store as patrol vehicles zoomed by.

He said the arrest of municipal officers and cartel suspects implicated in the disappearance of the 43 students has not made the city safer.

“The truth is that is that it’s even more unsafe. There’s extortion and kidnappings,” Salazar said.

Margarita Sanchez, a 49-year-old maid, said people are “killed and robbed every day.”

Her mother was robbed at gunpoint by a 10-year-old boy on Tuesday.

“Let’s see if the president realizes this by coming here,” she said.

Jonathan Hernandez, 29, who was riding a motorcycle with two other friends, said it was “bad” for the president to have waited so long to visit Iguala.

“For us Iguala residents, it’s a lack of respect that he’s only coming now. The city is still dangerous. It has gotten worse since what happened” to the students, he said.