Candidates on Edsa 30 years ago: Miriam 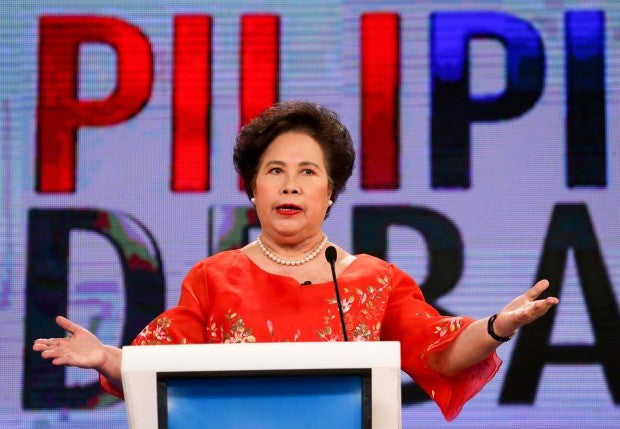 Thirty years ago today, Sen. Miriam Defensor Santiago was heavy with child and not allowed to move out of her house.

“[In February 1986], I was four months [pregnant] and, because of a complication, was under doctor’s orders to observe bed rest. Without consulting my obstetrician, I went with my family in the direction of the highway. To protect my pregnancy, my husband had borrowed a van where I lay down, listening to the running commentaries of my husband and teenage son. We were unable to reach the camps, because the highway was too crowded with people. Everybody was excited and everyone was praying … ” Santiago recalled in her book “Cutting Edge: The Politics of Reform in the Philippines.”

She was a trial court judge at the time. In the same year, she was given the Distinguished Achievement Award by the National Police Commission and named among  The Outstanding Women in the Nation’s Service Award, for law, by the Philippine Lions.

Today, the 30th anniversary of the EDSA People Power Revolution,  the presidential candidate has no official schedule. Tomorrow, however, she will meet students at the University of Cebu in Banilad and give a speech, Santiago’s office said in a media advisory.

Friday’s event will only be the third time she will make a public appearance since the national campaign period started on Feb. 9. The first one was in Ilocos Norte and the second in Ynares Center Pasig at the launch of her youth volunteer group. She was also in Cagayan de Oro for the first official presidential debate over the weekend.

Her running mate, Sen. Ferdinand “Bongbong” Marcos Jr., the namesake of the late dictator removed from power by the revolution being commemorated today, has also no plans scheduled for the day.