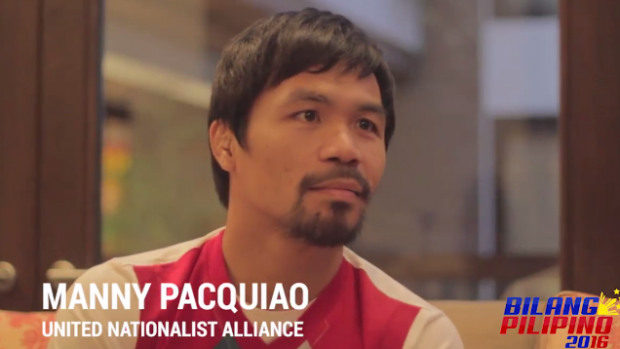 Television network TV5 on Sunday denied splicing the 30-second video of United Nationalist Alliance (UNA) senatorial aspirant Manny Pacquiao where he expressed his view on same-sex marriage and said that it was “minimally edited in good faith.”

It also said that it gave the raw interview to Pacquiao’s camp the same day the video was released.

“The video that was posted online was not spliced but minimally edited in good faith and with reasonable care. There was no intention to change the context or misrepresent the essence of Mr. Paqcuiao’s statements. On the same day the video was posted, News5 gave the full raw video to Mr. Pacquiao’s camp, after which he issued his apology in social media,” TV5 said in a statement.

“Moreover, the video of Mr. Pacquiao’s interview was likewise broadcast in its entirety on TV5, on the primetime newscast of Aksyon on February 16, 2016,” it added.

The accusation was hurled against TV5 after the full version of the video went viral on Saturday.

The video, which was posted on the Facebook page of a certain “Kupal Lord,” has since been viewed more than 5.2 million times.

In the one minute video posted on the “Kupal Lord” page, Pacquiao explained that as a Christian, same sex marriage is prohibited. He then uttered his now controversial statement relegating members of the lesbian, gay, bisexual, and transgender (LGBT) community as “worse than animals.”

However, he explained that he is not condemning them.

“I am not condemning them ah. Yung marriage lang, committing sin against God,” the boxer-legislator said.

In the comment section of the Facebook post, netizens slammed TV5 and the media for releasing its 30-second teaser of the Pacquiao interview released last Feb. 15 which supposedly took the boxer out of context.

Backlash against Pacquiao was immediate, with netizens and LGBT personalities condemning him for his gay slur. He was subsequently dropped by Nike as one of its endorsers.

Pacquiao has since apologized for his statements. AJH/JE