I’ll do anything to kill time, says refugee in Germany 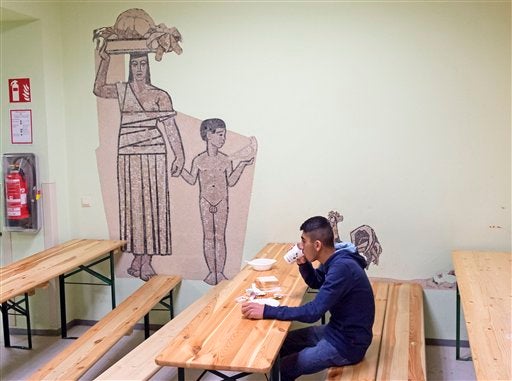 A migrant sit in front of a mosaic picture during his dinner at the initial reception centre for asylum seekers in a former miners hospital in Gera, central Germany, Thursday, Feb. 18, 2016. The EU’s top migration official warns Austria that its plans to cap the number of people who can apply for asylum is unlawful, as EU leaders gathered to try to end their fragmented response to Europe’s biggest refugee emergency since World War II. AP PHOTO

BERLIN–In the Berlin gym that now serves as his home, Afghan student Yaza sweeps the floor over and over again, just to keep himself from “going crazy with boredom”.

The 24-year-old, who spent months on the road after fleeing the Taliban, told Agence France-Presse: “I’ll do anything to not go mad.”

That includes helping to distribute meals or building bunk beds. In between time, he rolls cigarettes with others in the same boat as him, exchanging stories about their road into exile, the countless borders they crossed and the exorbitant sums they paid to human traffickers.

Tens of thousands from Syria, Iraq, Afghanistan and elsewhere are waiting impatiently for German authorities to process their asylum requests.

Many long to return to work or college, but before they obtain residency, they have to find ways to kill time.

“I studied economics in Kabul but I can’t work here before I obtain a long-term residence visa,” said Yaza, who arrived in Germany three months ago.

At the back of the gym, a group of young Iraqis and Syrians sporting track pants and slippers are sitting under a basketball net, listening to Arab pop music blaring from a mobile phone.

Idriez, 22, from the western Syrian port city of Latakia, was trying to work out the complexities of German grammar.

“Der, die, das,” he recited, glancing at a whiteboard where volunteers had written the masculine, feminine and neutral forms of the article ‘the’.

“I want to go back to school here but I need to be able to speak German first,” he said, before losing himself in his book “German for Beginners”.

The days at the shelter, also home to 168 other people, are monotonous, punctuated only by breakfast, lunch and dinner.

Morning and midday meals are usually comprised of cheese, bread, olives and a hard-boiled egg. In the evening, a warm meal is served.

Although children usually get sent to school fairly quickly, young men and women often have to wait months before they can start German classes.

In a nearby church, volunteers give classes every Monday and Wednesday to arm the newcomers with some basic German as they battle their way through complex bureaucracy.

The rest of the time, however, the refugees live in a parallel world, with little or no contact with German society.

Economists have been calling on authorities to speed up the integration process by offering training more swiftly.

“The process of integration like language classes should begin as soon as possible, because that’s what determines whether integration would be successful in the long term,” said Thomas Liebig, an economist specialising on migration issues at the OECD.

He believes that educational and professional qualifications should be examined at the same time that the asylum application is made, so that appropriate classes can be offered quickly.

But with 1.1 million new arrivals in 2015 alone, German authorities are running a massive backlog.

Between 300,000 and 400,000 people were still waiting to be registered, said the chief of Germany’s refugee office, Frank-Juergen Weise, in early February.

Some migrants are so exasperated that they have decided to simply leave.

Since September, around 1,970 Iraqis have opted to go home.