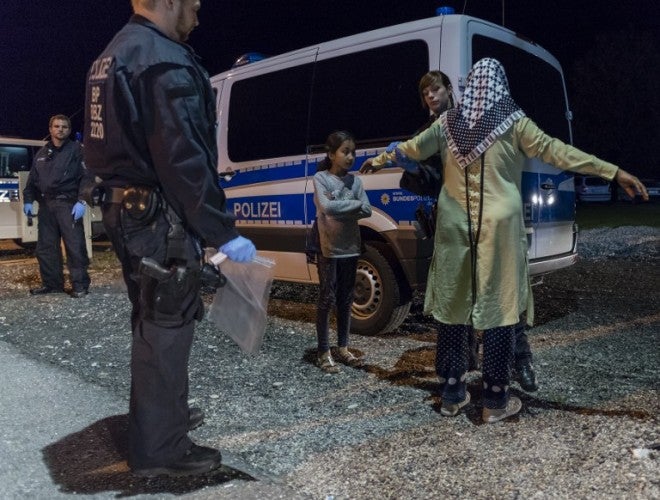 A policewoman controls a refugee mother and her daughter at the German-Austrian border near Piding, southern Germany, on September 14, 2015. After admitting that its capacity in the refugee crisis had been stretched to the limit, Berlin reintroduced identity checks on people travelling from the passport-free Schengen zone, and essentially announced an end to its open-doors policy to Syrians. AFP PHOTO / GUENTER SCHIFFMANN

German police were carrying out checks on the Austrian border Monday following Berlin’s stunning decision to reintroduce passport controls, as a new record migrant surge into Hungary raised the stakes ahead of crunch EU talks.

Chancellor Angela Merkel’s dramatic reinstatement of checks on Germany’s frontiers marked a new phase in the continent’s migrant crisis and struck at the heart of the EU’s cherished Schengen agreement, which allows border-free travel throughout most of the bloc.

“Europe’s inaction in the refugee crisis had driven Germany… to the limit of its capacity,” her deputy Sigmar Gabriel told the Tagesspiegel daily.

Underscoring the scale of the challenge, Hungarian authorities said Monday they had registered a record 5,809 migrants streaming into the country the day before, amid reports that neighbouring Serbia might try to “push through” as many as 30,000 people before draconian new laws come into force.

Hungary is racing to finish a controversial anti-migrant fence on its frontier by Tuesday, when it will start arresting illegal migrants.

“We have been walking through Europe for 22 days,” said 27-year-old Hatem Ali Ahaj, who suffers from asthma and was struggling to catch his breath.

“We thought that Germany was the only country that would treat us like human beings,” he said.

Facing the biggest refugee crisis since World War II, ministers from EU member states will gather later Monday in Brussels to try and heal deep divisions in the bloc over migrant policy.

Germany — Europe’s top economy which is expecting 800,000 migrants this year — had previously signalled it would throw open the country’s borders to Syrian refugees.

But the abrupt U-turn and admission that even powerhouse Germany cannot cope with the record influx has underlined the importance of interior ministers’ talks in Brussels later Monday.

The European Commission — the EU’s executive — last week unveiled a plan to redistribute 160,000 migrants across the continent to relieve pressure on “frontline” states such as Italy, Greece and Hungary.

However, this has run into stiff opposition from several Eastern European states such as the Czech Republic and Slovakia.

Czech Prime Minister Bohuslav Sobotka insisted his country would never accept compulsory quotas, saying the system “won’t work”, while Slovakia said it would try to block any such binding measures.

Slovakia on Monday introduced checks on its border with Austria and Hungary, reinforcing fears that Germany’s move would lead to a domino effect.

But the Commission stressed that the German border decision “underlines the urgency to agree on the measures proposed by the European Commission in order to manage the refugee crisis.”

With human side of the crisis prompting a wave of sympathy particular in Western Europe, tragedy struck again off the coast of Greece, with 34 more migrants — including four babies and 11 children — drowning when their overcrowded wooden boat capsized in high winds.

Justifying Berlin’s decision, Interior Minister Thomas de Maiziere said Sunday that “the aim of this measure is to stop the current influx to Germany and to return to an orderly process.”

Migrants must understand “they cannot choose the states where they are seeking protection,” he told reporters, as Germany also temporarily halted all train traffic to and from Austria — which restarted on Monday morning.

The hardline prime minister of Hungary, which wants much stricter controls around the edges of the EU, welcomed Berlin’s move.

“We understand that this decision was necessary in order to defend Germany’s and Europe’s values,” Viktor Orban told Bild newspaper.

Merkel “is not shutting the door, she is re-introducing checks to ensure that those who enter Germany have the status of refugees and that the countries up the chain have respected the rules of Schengen,” Interior Minister Bernard Cazeneuve told RTL radio.

For those already in Hungary, the confusion over Europe’s policy has meant a fresh scramble to get to their destination.

“I cannot wait here. Time might be running out,” said Fayik, a slight and smiley Afghan who can speak five languages.

“I don’t like doing illegal things, but sometimes there is no choice. I have been very quick. I have to continue to be quick,” said the 20-year-old.

Under EU rules, the first country of entry is required to deal with an asylum seeker’s request for protection.

Merkel, whose country expects to receive 800,000 asylum seekers this year, bluntly warned last month that the passport-free Schengen zone of 26 countries was under threat if the EU failed to work together on coping with the inflow.

“If we don’t arrive at a fair distribution then the issue of Schengen will arise — we don’t want that,” she said.

Britain, which is not part of the zone, on Monday appointed a minister to deal specifically with the 20,000 Syrian refugees the country has agreed to resettle over the next five years from camps bordering the war-torn country.

The International Organization for Migration has said that more than 430,000 people have crossed the Mediterranean to Europe this year, with 2,748 dying en route or going missing.