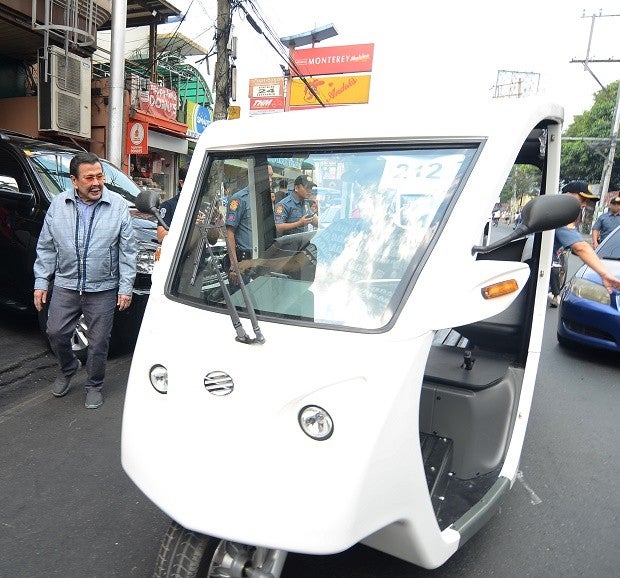 The city government of Manila on Saturday formally unveiled “e-trikes” or electronic tricycles that will soon traverse the streets of the Philippine capital.

Estrada said the e-trikes would not only promote an environment-friendly transport but also allow drivers to earn more, save on fuel costs, and eventually own the new vehicles through an amortization scheme.

(I know that you are all working on making rounds to earn money to remit to your operators for boundary, and whatever is left, for your family. Now, we will provide a solution to your problem. Apart from earning relatively well, you will also help lessen pollution in the city.

This will be our solution to your problems on boundary, budget, and other…Primarily, the problem on oil is that its cost in the world market constantly changes.)

The Asian Development Bank provided loan to the Philippine government for the purchase of the vehicles, each costing around P480,000.

City administrator Jojo Alcovendaz previously said in a statement that the e-trikes would be fielded first in tourist-popular Ermita and Malate areas.

He said the e-trikes, with electric units that need to be charged for just four to five hours for a whole-day run, run on gel-type batteries and reach a maximum speed of 45 kilometers.

Estrada said an e-trike was more spacious than an ordinary tricycle and can load up to six passengers.

(No crowding. Everyone will ride comfortably, and there is no risk of accident.)

The local government is working on an amortization program for drivers who would want to acquire the e-trikes.

(For those of you who will be availing of the e-trike, you will be given four years to pay. Aside from eliminating fuel costs, the P150 that you used to give to your operator daily will be your installment [for the e-trike]. After four years, the e-trike is yours.)

The launch was attended by officers and members of the Philippine Confederation of Drivers and Operators—Alliance of Concerned Transport Organizations (PCDO-ACTO). CDG